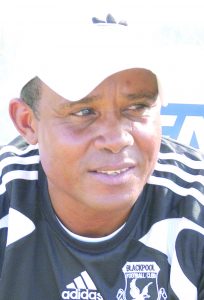 Mighty Tigers Coach, Gerald Phiri Senior, has said Be Forward Wanderers have not approached him to take over the mantle at the Lali Lubani Road side.

“I don’t know anything about the matter. I am happy at Tigers because I have built a strong side. If Wanderers officials want me, then they will also discuss with my bosses. So, let me come back to you once they approach me,” he said.

Phiri is among the coaches that have been linked with the head coach position at Wanderers, following reports that the Bob Mpinganjira-led coaching panel has been suspended.

Reports also suggest that Albert Mpinganjira has been earmarked as interim caretaker coach.

Albert said he was still coaching Wanderers reserve side.

“I am hearing this from you. If that is the case, then I need to be communicated to,” he said.

Wanderers started the season promisingly after beating Mzuni 5-0 in a TNM Super League match but lost 0-1 to Silver Strikers in the first leg of the Airtel Top 8 before falling 1-3 to Blue Eagles on Sunday.