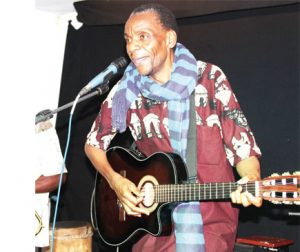 The show lived up to its billing with an impressive audience on the night enjoying the acts of C.O., and Quinn, who were the main headliners as well as Waliko Makhala, Malala, Agorosso and Jaca Steppers and Jacaranda Cultural Troupe.

The climax was even interesting as people took to the dance floor to enjoy the performance of C.O. and his The Tribe Band.

C.O., as the last act on the night, made sure he continued from where other artists had left and he did not disappoint.

The artist told the audience in between his set that he has rebranded and that he is now deeper into music that has a Malawian identity.

“The experience I had with groups such as Chichiri Cultural Troupe helped me to appreciate our culture. If we are to grow then we have to utilise our own traditional dances and that is what I am doing now,” C.O. said.

He also took people down memory lane when he performed ‘Saganiza’ done by Love Aquarius.

Although there were some technical glitches during some performances, the concert offered the best on the night.

Agorosso was the first to hit the stage and, as usual, he gave the audience the finest sound.

After Agorosso came Malala, who also brought the best from his collection, opening up with a song calling on people to unite and refrain from violence ahead of the 2019 elections in the country.

There was also a moment when he performed the late Dymon Kuzala’s song and ended with a medley that had songs such as ‘Galuyu’ and ‘Serah’ which reminded the audience of a primary school days.

Makhala was also the toast of the night with uncivilised music which he terms bush music, music of the ancestors.

Jacaranda Cultural Troupe also had their share, warming up as they are also set to perform at the Lake of Stars Festival, and after them came Jaca Steppers, who showed the best of dancing.

Franklin Rashid also gave people a treat with his poem ‘I am in Love with Myself’.

Quinn, who is from the UK but is based in the country armed with her acoustic guitar, also gave her share.

“We would like to thank people for the support. It’s been a great night, particularly that this is Music Against Malaria project,” Quinn said.

C.O. said they have so many shows coming up and that they were looking at raising more to rehabilitate the Queen Elizabeth Central Hospital’s children’s ward.

“As I indicated, our target is K30 million and so far we have raised about K5 million,” he said.