I will sell my maize, and buy from my colleagues who applied aflasafe in their field so that I eat aflatoxin-free food with my family,” declares Samson Banda of Mlonyeni in Mchinji. Banda is answering a question from officials from the Ministry of Trade, Industry and Tourism, as well the Partnership for Aflatoxin Control in Africa (Paca).

The International Institute of Tropical Agriculture (IITA), under the Feed the Future Malawi Improved Seed Systems and Technologies (MISST) project had taken them on a field visit to Mchinji to appreciate the quality of maize and groundnuts whose fields had been applied with aflasafe to control levels of aflatoxins.

Deputy Director of Trade in the Ministry of Trade, Charity Musunzu, and the Paca Country Officer for Malawi, Mphatso Dakamau, smiled in approval, a sign that Malawians, especially the rural masses, now understand the threat that come with consuming aflatoxin-infected produce.

Plant pathologist and Project Manager for the MISST-Aflasafe component at IITA, Joseph Atehnkeng, also nods and gives the group of farmers a thumbs up!

“Aflatoxins are deadly poisons which cause a lot of health problems in the body such as various types of cancers, stunting and they obstruct the uptake of food nutrients by the body.

Any food items which they import need to meet those standards. For the USA for example, the limit is four parts per billion (4 ppb),” explains Atehnkeng in an interview.

Musunzu adds from an economic and trade perspective Aflatoxins cost Malawi around K8 billion annually from missed business opportunities to the high levels of aflatoxins in our produce.

“We are happy that IITA is leading in the development of a bio-control product which will greatly help deal with this problem,” she said.

IITA is leading a research project on the development of a bio-pesticide which will be deployed and commercialised for use by farmers to control aflatoxin levels in maize and groundnuts.

The product, called aflasafe, was developed by IITA in Nigeria and has since been adopted in Senegal, Kenya, Tanzani and Zambia, among other countries. The development of aflasafe involves the use of local strains of non-aflatoxin causing Aspergillus favus.

Aflatoxin develops when the fungus that causes them (Aspergillus flavus) colonises the crop. This can happen both in the field before harvest, as well as after harvest in the storage facilities. Aflasafe is made by those strains of the fungus that do not have the capabilities to cause aflatoxins.

Before the field visit to Mchinji, which is one of the beneficiary districts in the MISST Aflasafe Project, the team from the Ministry and Paca paid a courtesy call to the IITA offices at Chitedze.

The team also visited the aflatoxin research and training laboratory at Chitedze Research Station in Lilongwe, which has been refurbished by IITA under the MISST project.

The Country Representative for IITA to Malawi, Arega Alene, pointed out that there is encouraging progress in the steps towards having aflasafe certified and registered by Malawi government.

“Two products have been identified and their efficacy being evaluated in farmers’ fields, and soon we hope to start the registration processes. Once that is done, the commercialisation drives will kick in. As IITA, we are happy to be contributing towards having such a product for Malawian farmers, and I personally can’t wait to have the product on the market,” said Alene.

Paca Country Officer, Mphatso Dakamau, added that aflatoxin-free produce also fetch better prices on the market, which should act as an incentive to farmers to adopt aflasafe as a biocontrol for aflatoxins in Malawi.

“As Paca, we are also coordinating all the various activities in all the ministries concerned in one way or the other in aflatoxins management. These are the ministries of Agriculture, Irrigation and Water Development; the Ministry of Trade, Industry and Tourism; as well as the Ministry of Health,” said Dakamau during the laboratory visit.

Several technical staff have since been recruited and are being trained on aflatoxin detection and microbiology protocols, according Atehnkeng the Project Manager for the IITA MISST Aflasafe component.

All these are efforts in making the Malawi maize and groundnut fit for sale even to those markets which are very stringent.

“We are losing out on markets in South Africa, the United States of America (USA) and Europe because of their stringent rules of aflatoxin levels in crops like maize and groundnuts,” said Musunzu in an address to farmers in Mlonyeni Extension Planning Area (EPA).

Musunzu said that is why the Malawi government through the Ministries of Trade, Industry and Tourism; Health; and Agriculture are following with keen interest progress being made in having reliable biocontrol products for aflatoxins such as aflasafe.

“We are keenly following the developments and progress being made in the development of aflasafe in Malawi which will play a significant role in reducing levels of aflatoxins in our maize and groundnut produce. This is turn will invigorate our trade opportunities with markets which are strict on aflatoxin levels. In addition, aflatoxin-free produce is also good for our own local consumption in that such produce will improve the health and nutrition standards of Malawians and help avoid health related issues such as stunting, malnutrition and diseases like cancer,” explained Musunzu.

Interestingly, other farmers who did not apply aflasafe in their fields said they intend to buy from their colleagues the aflasafe-treated maize for their household consumption.

The MISST aflasafe project is being funded by the United States Agency for International Development (Usaid) through Feed the Future. Towards clean water for all 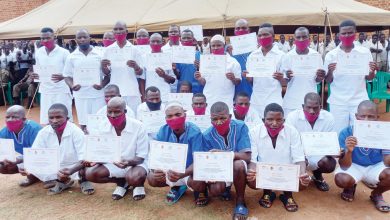