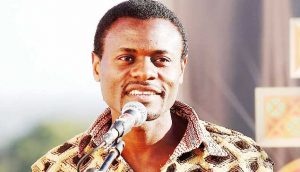 Founder of the free annual Tumaini Festival Menes la Plume said on Friday that the festival has made strides in selling Dzaleka Refugee Camp in Dowa District to the world and show that refugees are also human beings.

Menes la Plume, a Congolese poet whose real name is Tresor Mpauni, said Dzaleka Refugee Camp was not even known to some Malawians but today because of Tumaini Festival, it is a different story.

“Tumaini means hope and when I was starting it I was talking about hope for refugees but now I can rightly say that it is hope for Malawi and hope for the world”, he said.

Menes said Tumaini Festival has shown that refugees can look for shelter and, at the same time, give shelter to other people.

“We need to work together and love each other. Everyone is afraid of refugees with the refugee crisis but through Tumaini Festival, it has shown that we are all the same and need to celebrate life together,” Menes said.

The festival in its fifth edition, this year showed its growth extending from one day to two days.

The first day on Friday attracted a huge audience that partied until late on with gospel group Great Angels Choir closing the chapter on the main stage.

“It feels great to have it for two days, we worked so hard and this is a great achievement and a feeling of satisfaction. You can see that we had more people on the opening day and also the last day. It shows we are growing so fast since we started five years ago,” he said.

Menes said they added another day to the festival because the community was asking for more.

“One day was not enough and two days it’s been great with the market [getting] bigger. We actually organised that the community can host visitors and the visitors pay the community through the homestead programme,” he said.

Menes said they would continue improving the festival with the hope of extending it to three days.

“Since we started, the mindset of people towards refugees has changed, the barrier which was there has been broken and talent has been exposed,” he said.

Although some artists did not make it at the eleventh hour due to what Menes described as financial problems, he said they were satisfied with the lineup and that people enjoyed a variety of arts activities.

Great Angels Choir performed at the festival for the first time.