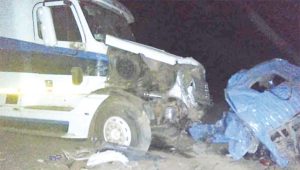 Twelve people have been confirmed dead while 13 others sustained injuries in a road accident which occurred Tuesday evening in Mchinji District along the Lilongwe- Mchinji Road.

“An eyewitness told the police that upon arrival at Chikhutu Village near Guilleme Turn-off at around 6 o’clock in the evening, the driver [now deceased] was trying to overtake a minibus. In the process the lorry collided head-on with a freighter registration number NS1842/ NS2551,” Lubrino said.

Due to the impact, the lorry is said to have veered 50 metres off the road into a maize field.

“Seven people died on the spot while three others were pronounced dead upon arrival at Mchinji District Hospital. Two others died while receiving treatment at Kamuzu Central Hospital where all the casualties were referred,” Lubrino said.

According to Lubrino, 12 people who sustained various degrees of injuries were receiving treatment in hospital.

All the deceased are said to have been from Kapanila Village in Traditional Authority Zulu in Mchinji.

Meanwhile, the police have warned drivers and all road users to observe all road regulations.

No 6 points in MSCE exams results