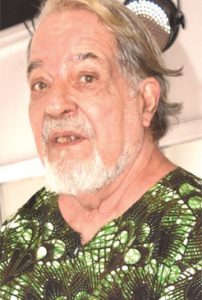 Kungoni Arts Centre of Culture— which is under Mua Mission in Dedza District, and is led by Father Claude Boucher, popularly known as Achisale— Saturday afternoon officially opened its second exhibition at Jacaranda Cultural Centre, Mandala, in Blantyre.

Kungoni’s first exhibition in Blantyre, after close to 20 years was last year titled ‘Malawi at Crossroads’.

The second exhibition themed ‘Dancing the Dance of Change: Adapting to the Rhythm of the Search for Identity’, attracted an impressive audience although the number of locals was small.

Speaking to the audience during the launch of the exhibition that has put together 44 works from 26 artists, Achisale, who speaks Chichewa fluently – having come to Malawi from Canada in 1967 – said the exhibition is there to provoke change.

“The artists had a lot of fun in creating the works. This exhibition carries a series of snapshots and caricatures of the world around us,” Achisale said.

It would have been better to have more locals at the exhibition, more importantly politicians, government officials and other high profile players to tap into this expo.

But those who missed the opening have a chance to do so as the exhibition runs for two months.

Achisale said the expo this year is different from last year’s and that this one goes a step further.

He said the exhibition carries a series of snapshots and caricatures of the world around us.

“All of these 44 items convey different steps in dance; they bring together different rhythms expressing our search for identity. We hope people will find much fun in viewing the works,” Achisale said.

He said this correction brings wide views and responses conveying the Malawi of today.

“It is an invitation to the viewer to widen his or her own experience beyond his or her family world to the suburbs and to the rural areas that face a totally different life,” he said.

Some of the artists whose works form part of the exhibition are Henry Kammwamba, Thomas Mapira, Chapita Kalolo and Samson Jibu.

Artists actually could not skip the issue of power failure in the country and one piece by Nicholas Chiwaya captured people’s attention.

Chiwaya suggests in his work that Malawians should look at other options of power supply.

In the work, a giraffe, full of foresight, has connected its cellular phone to a communications tower while an elephant carries on its back a solar panel that will assist it suck water from the waterhole.

The other issues tackled in the exhibition, whose official launch was spiced up by a performance of Jacaranda School for Orphans students, include bloodsuckers, satanism, witchcraft and consumerism.

Achisale also said Malawians are creative, adding that the expo is a tribute to that exceptional creativity and adaptability.

“It is also a tribute to their great sense of humour that prevents them from falling into despair facing the uncertainty of the future. All of us have had the experience of failure, yes; but have we all been affected to the same degree?” he asked.

“We can giggle at our own mistakes. Nevertheless, we have to handle the bull with both hands, without fear, trusting in the cultural values we live by,” Achisale said.

Richard Shelton from Otis College of Art and Design, who came with a team of students and teachers through their partnership with Jacaranda School for Orphans, said he was amazed with the exhibition.

“There is so much to learn about Malawi’s culture and our students have benefited a lot,” Shelton said.

Jacaranda School for Orphans Executive Director, Luc Deschamps, hailed Kungoni for the exhibition, saying it tackles contemporary issues such as power failure and encourages people in Malawi to do something.

“It has also shown that artists are not sleeping but are watching what is happening on the ground and are ready to bring about change,” Deschamps said.

‘Department of Museums, not a hub of old stuff only’