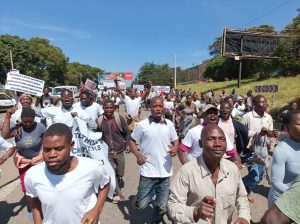 The citizens held demonstrations from the Lilongwe District Council Offices, passing through the Chilambula Road to Parliament where they presented the petition.

According to Chairperson of the group, Redson Munlo, they want Chizuma fired because she is not fit to hold such an office, and Pac should fire her based on the leaked audio in which Chizuma was revealing secrets of her office.

He said failure by Pac to fire Chizuma within the stipulated seven days would see the concerned citizens holding vigils at the Parliament Building.

“Each office has rules and procedures to be followed and in this case Chizuma failed to uphold the conditions of her office. So we want her fired.

“As a nation we are afraid that the secrets of ACB are no longer safe with Chizuma being the boss. For this we want all people that are being called to be questioned by ACB to refute the invitations for they are not safe,” Munlo said.

Receiving the petition, a member of the committee, Arthur Chipungu, said the committee will look into the matter.
“We have received the letter and we believe the concerns made will be looked into and decisions will be made which will be known to the public once the committee meets,” Chipungu said.

In a leaked conversation with an unidentified person, Chizuma made a number of claims, including that there were many people, including lawyers and judges who were working towards frustrating her efforts in bringing to justice UK-based businessman, Zuneth Sattar.