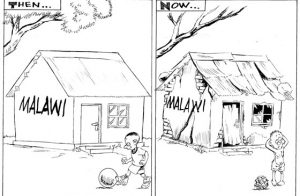 Some years ago, my senior colleague Charles Mpaka weaved a tantalizing, albeit, heartbreaking feature in The Daily Times titled ‘Where did the gumboot man go?’

I am not sure whether Chuck went on to win an award for the piece but I am certain the article remains an epitome of artistic masterly of sewing threads of nostalgia in a fabric of a nation’s retrogression or misdirection.

In the article, Charles bemoans the almost nonexistence of agriculture Extension Officers who in the past went about and around advising people of good agricultural practices. They wore gumboots and people used to call them ‘Namajombo’ (Gumboot man).

Why I find the said article immaculate is that it points clearly how the nation has gone on a depressing reverse flight. A quick glance into the mirrors of time, one would easily notice that our nation has abandoned some seemingly small structures yet these were important for national building.

Once upon a time, this country had an airline that flew people straight to London. Today what we have is an Ethiopian Airline generously named Malawian Airline just to make us feel good. The truth is that we do not have an airline we can call ours.

Jetting at Chileka Airport, one would think the plane is crashing on some barren field only to realise it is some airstrip exaggeratedly called airport. Such is our country.

When this country was organised, we used to have serious primary school inspectors visiting schools time and again to monitor if teachers were maintaining high standards of education. Where are they now? At my Namalimwe Primary School, Blantyre City officials used to come to disinfect toilets every week and students and teachers would use the facilities comfortably. Today, what used to be toilets are some abandoned reeking buildings, too filthy for one to come close to. It is a sad story that a school right in town should have stinking pit latrines for convenient places for students and teachers. What happened to standards?

Why we have become what we are is that we have abandoned a culture of maintaining standards, a high degree of integrity, and opted to become a nation daily devising means of stealing from ourselves.

Not a week passes without one of the papers or radios or televisions busting some crooked deal in the government. The government—to be raw—has become, as one opined, a stinking corrupt enterprise that has long forgotten its essence.

Everything in this country is going on a scary reverse path such that if we do not reclaim what used to be a country, posterity will laugh at us and look at us with disdainful scorn for being passive and tolerant to a nation’s collapse.

Look here; is it not embarrassing that we have all sectors upside-down, inside-out, left-side-right? Our education system is shambolic, our agro-based economy relies on archaic hoe and panga methods to grow a crop which the whole world is on a massive campaign to do away with, our infrastructure is pathetic, and even in sports, we just have this reputation of perpetual losers.

As a nation, we clearly do not have a strategy to move ourselves forward. Look at Rwanda. A nation that, while we were in the frenzy of attainment of democracy and multiparty rule, had its people butchering themselves in a gory and diabolic tribal war, is now developed beyond recognition.

Zambia, Mozambique and Tanzania who are our neighbours, would feel insulted if compared to the wreck that is called Malawi.

But when you start to read and go deep into the reasons we are in this state, all you have is a formal feeling of anger and resentment. One mistake we have made as a nation is to put our trust in thieves who we waste honorifics on.

And then, like some inane and senseless bundle, we have leased the country to some crooked foreigners who know our buffoonery and can abuse us to steal our money by even convincing the highest echelons of this we call a country.

Malawi is sick and we, meaning all of us, have failed to take pride in being Malawians. We have let our progress pace sag because of selfish intentions. Actually, we are on a fast lane to damnation. My greatest fear and regret is that my children will laugh at me and call me a coward who stood in trance while the nation was being plundered.

But, of course, I will tell them that before we started electing thieves into positions of power, Malawi was a country, once.