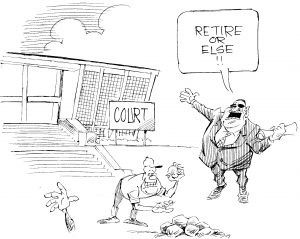 As the clock is ticking to a fresh presidential election, the nation is in full flight and fight.

Political skirmishes and government throwing weight around are things that are happening daily, starting with President Peter Mutharika, through Chief Secretary Lyold Muhara, who decided to be petty and cause unnecessary storm in a cup of tea.

It all started with Muhara assuming powers he does not have by writing the Judiciary that Chief Justice Andrew Nyirenda as well as Justice of Appeal Edward Twea have 500 days of leave that are due, at the end of which they must retire as they have both clocked the mandatory 65 years of age.

Then the campaign is in full swing, with a survey conducted by the Institute of Public Opinion and Research (IPOR) giving a huge campaign boost to MCP leader Lazarus Chakwera who is also the Tonse Alliance presidential candidate.

IPOR’s survey found that Chakwera is leading by 51 percent against Mutharika’s 33 percent.

The survey also revealed that 10 percent of voters are undecided on who to vote for while the other 4 percent have said they will not vote at all.

My take on the Executive fight against the Judiciary is very simple and it is to advise the President and his circle to stop abusing state power for political vendetta, especially now when they are looking for votes from the same Malawians that they do not seem to care to upset on daily basis.

Even a child born yesterday is aware that Muhara wrote that letter to the Chief Justice as a continuation of the assault President Peter Mutharika has launched on the Judiciary because of the ruling that went against him in both the Constitutional Court as well as the Supreme Court.

The letter by Muhara was not written out of the blues but it is part of a grand strategy by the DPP establishment to “sort” out a Judiciary they think has let them down by nullifying last year’s presidential election.

But there is no merit in the petty way in which the Executive is personalising state issues because Malawi is not a personal estate of anybody but a country belonging to 18 million people governed on the principles of rule of law.

Malawians will not accept this senseless assault on judicial independence as if the Judiciary was not born from the same Constitution that the presidency hailed from.

Malawians are awake about their country and know exactly how it should be governed and when someone is trying to behave funny because they wrongly and pathetically believe they are the alpha and omega of this nation, they will not by and watch.

That is why there is a huge uproar about Muhara’s action starting from an injunction by Human Rights Defenders Coalition and Malawi Law Society against the implementation of what is contained in the OPC letter.

This was to be expected.

If the DPP establishment has strategists, then they must walk with their heads down in shame because they are an embarrassment as they seem to be in a habit of always underestimating public reaction to their actions which leaves the President with an egg all over his face as a result of the public anger.

How does the President feel that even fellow law dons in universities across the world condemned this attempt to get rid of the Chief Justice because he ruled against him?

Clearly, APM is failing to come to terms with the fact that he lost the elections case in a legally constituted court and now wants to use political power that Malawians gave him to settle what he wrongly considers a personal score with the Chief Justice instead of campaigning as hard as his body can physically manage so that he retains power when Malawians finally go to vote.

Talking of campaigning, the IPOR survey says MCP president Lazarus Chakwera is leading Mutharika in the opinion poll something the President must be dealing with otherwise he is in political trouble.

Probably that is the reason he came out in full force this week, taking a gruelling road trip from Blantyre to Lilongwe on Wednesday to beg Malawians for their vote.

Otherwise the response to the IPOR survey by the President’s handlers left a lot to be desired.

By all standards IPOR has credibility and they have done opinion polls in this country since time immemorial and so trying to attack their work while wearing political lens will not help.

In the end the only opinion poll that matters is the election itself.

And so parties must get it right by campaigning hard so that those the poll is favouring must actualise the success on polling day while those it is predicting failure must work hard to probably reverse the prediction.

Otherwise, the anger and rancour we have witnessed for the poll is uncalled for and is merely contributing to the full fight the nation is in.

Malawians are eager to see an end this fight in the upcoming election.