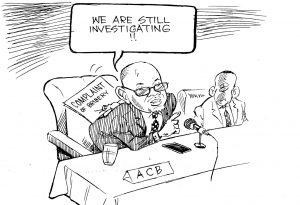 The press conference the Anti Corruption Bureau (ACB) Director-General Reyneck Matemba called on Tuesday was supposed to placate a nation on edge that the bureau is doing everything in its power to get to the root of the matter.

And the matter is thus.

On Sunday evening, the nation was shocked to hear the news on Times media platforms that judges presiding over the landmark elections case at the Constitutional Court had complained to the Anti- Corruption Bureau (ACB) that some hitherto unnamed people approached the judges with a bride to make a verdict that favours them.

The Chief Justice reported the matter to ACB.

Matemba did not waste time to confirm to the nation that indeed ACB had received a written complaint from Chief Justice Andrew Nyirenda on the matter related to the presidential elections case that is pending judgment in the Constitutional Court but refused to name the suspects.

Clearly, Malawians were not happy with ACB’s response on the matter and what they clamoured about is blood on the floor.

They wanted names and rattled and whined on social media and other forums days on end this week, demanding the head of those trying to bribe the judges.

Bodies such as Malawi Law Society weighed in and demanded arrests of the unnamed people.

Then on Tuesday came the press conference which has been described as disastrous in many quarters for the right reasons.

That Matemba lost his cool and veered off the script to project something that probably he did not plan to do in the circumstances is indefensible.

That the ACB boss sounded a bit cocky with words such as ‘I will not move an inch’, in relation to his resolve not to reveal three individuals who tried to bribe the five judges, was obvious both in his demeanour and pronouncement.

But for me, at the end of day, the catastrophic press conference represented an ever widening chasm that is there between the expectations and frustrations of the public on how the corruption fight is being conducted in this country and those entrusted to  do the actual donkey work to bring the bad guys to face justice.

If you took a public survey on how the fight against corruption is being done in the country, chances are high that the findings would be that we are not making progress.

If you took the same survey to ACB officers, probably the findings would likely be that they are trying but a plethora of frustrations will be put forward as reasons hindering the fight, one of which would the high and unmet expectations of the public that has eroded any trust left in the ACB.

This widening gap was on display that Tuesday afternoon.

But as Matemba somehow noted himself, the case at hand should have provided a once-off opportunity for ACB to show Malawians that it still has the teeth to bite despite the fact that corruption has gotten worse since the bureau was born in 1998.

The attempt to bribe the judges was to be expected because this is what Malawi has become in that in everything we do someone who has an interest must offer a bribe for inducement and this matter was not going to be an exception.

ACB should have been proactive and be ready for it.

It should have handled this matter better knowing that the Chief Justice is no ordinary person to whom the five judges reported the attempted bribery and who in turn took it to ACB.

ACB’s refusal to name the culprits at a time the social media was awash with names of the possible people involved, arguing it could jeopardise the investigations was probably going to be justified with action on the matter.

The ACB DG said during the press that Chief Justice reported the matter to him on December 28.

The public has the right to expect that there was enough time to finish investigations and some movement leading to the revelation of the identities of the persons behind this macabre and sordid affair should have happened.

In the end, the matter should not have happened as it now helps to add the tension that is obtaining on the ground at a time the nation is pregnant with expectations as it awaits the delivery of judgment of the case in Lilongwe in which Malawi Congress Party president, Lazarus Chakwera and his UTM counterpart, Saulos Chilima, are asking not less than a nullification of the decision of the Malawi Electoral Commission (Mec) to declare Peter Mutharika as winner of the May 21 elections, citing massive irregularities.

This is the time the public must have full confidence that all is well about a case that has sharply divided the nation with citizens having deep fears about what would happen in the aftermath of the ruling.

The ACB was quick to say the individuals the Chief Justice has accused of trying to offer a bribe to the judges are just individuals and not party to the case.

But this is not making sense to the public because it is clear that whoever tried to bribe the judges has a side they are sympathetic to.

I repeat: The Chief Justice is no ordinary citizen as he is head of one arm of the government and the ACB should have treated his complaint as special and expedite the matter by quickly naming and shaming the suspects.

The Judiciary, traditional and full of decorum, has been eerie quiet to fears of the public which wants to know whether the complaint to the ACB will affect the delivery of the judgment which Malawians are waiting for with bated breaths.

Any change in the deadlines that the judges gave the nation because of this matter?

That is the question which the presser that was on Tuesday could not shed light on.

Neither is the Judiciary.