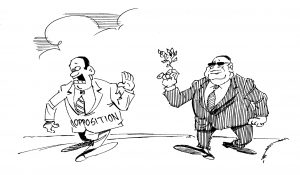 The olive branch extended by President Peter wa Mutharika to both opposition parties and rights activists upon his return from Russia last Saturday must have come as a surprise to many, considering the ‘bad boy-big boy’ talk between them since after May 21 Tripartite Elections. In fact, the bitter exchange even started way before the polls were held, fuelled by speculation by the politicians themselves of possible electoral fraud.

Others, however, are refusing to read much into Mutharika’s offer, arguing the embittered Malawi leader is only doing that out of pressure exerted by Malawi’s bilateral and multilateral partners. That might not be far from the truth, especially after we heard the other day that the Human Rights Defenders Coalition (HRDC) had reported the Malawi government to the United Nations and also the African Union (AU). Even former president amayi Joyce Banda also felt obliged to raise the issue of Malawi’s political upheaval through the women network at the AU, which goes to show the gravity of the matter at the moment. Be that as it may, it certainly brought a sigh of relief but then it has also aroused another question in the minds of most people: Is it not a little bit late for the President to be talking of reconciliation now?

It needed not get to this point, after all. A number of stakeholders, including this very platform, have tried on numerous occasions to appeal to the voice of reason in the political kingpins as well as those rallying the public, to consider coming together to a roundtable where a give-and-take resolution might be achieved as opposed to the confrontational approach displayed by sympathisers of Malawi Congress Party (MCP), Democratic Progressive Party and UTM. Galvanised by HRDC, people on the streets have equally been relentless and even after the government, through the Attorney General, tried to put a stop to demonstrations, they did not have solid ground which saw the courts snubbing them and, thus, it appears the right to demonstrate is here to stay.

It is no secret that even in the face of attempts by the likes of former president Bakili Muluzi and Public Affairs Committee (Pac) to mediate between the different sides, Mutharika, MCP’s Lazarus Chakwera and UTM’s Saulos Chilima have shown great disdain for each other in as far as the outcome of May 21 Tripartite Elections is concerned. The scathing attacks from either side have only added fire to the confusion, evident by the violent acts of the supporters lately. Not only that; claims of violence, torture and sexual abuse by some citizens at the hands of police have greatly compromised our reputation as a God-fearing and peaceful nation.

But, as they say, better late than never: Mutharika has finally come round to what everyone had wanted him to do but whether the others will come out and play ball is a whole different issue.

Once we get to the cause of the mess our country has found itself in, then we might realise that it might not been too late to rebuild the nation.

What are they learning?

Week in, week out, we keep getting disturbing reports about learners in public schools going on the rampage, destroying school property and, in the process, throwing in jeopardy their very future as their classes are curtailed to give room to property maintenance and resolve the issues that are making them start behaving strangely.

Having been a student once, I know just how quickly emotions can boil if authorities and leaners disagree and the recent cases involving Lunzu, Thyolo, Rumphi and Blantyre secondary schools as well as Mmanga Primary and Community Day schools are classic examples.

Now, I would not want to entirely heap the problems on the young ones because, as they say, it takes two to tangle and surely there must equally be something wrong the school authorities are doing to send the students off the rail and start burning hostels, houses, halls and anything they lay their hands on. Sometimes there are some unilateral decisions that school management makes that are indeed in bad taste and invoke the wrath of the students.

Take, for example, the allegations that some of the school administrators are replacing suspended students or admitting fresh ones just like that, when traditionally, one has to compete at a national level through examinations administered by Malawi National Examinations Board (Maneb) to attain a place. Such corrupt acts must be investigated and if proven to be true, the culprits must be held accountable not only for such behaviour but also disturbing the academic calendars for the schools concerned.

But then, are riots the answer to the challenges that could be rocking our education sector at the micro level? I do not think so.

I will close off by once again denouncing the unruly behaviour of the students. You will be the only losers, at the end of the day, because it is your education that suffers. To parents and guardians; are you still instilling a sense of discipline in your wards? Destruction of school property and disruption of classes should never be tolerated.

PMTCT interventions on track in Mzimba