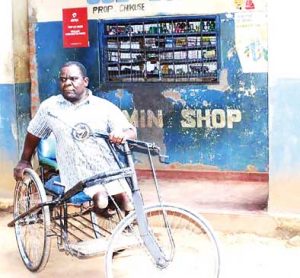 Masautso Chikutse is an enterprising man and the pillar for Mpita community in Lilongwe. He is an Airtel money agent, owns a big shop and loans out money to people.

He is also an exceptional individual who finds it easy to part away with the little he gets from his businesses. Most of it goes into supporting orphans and other vulnerable children to pursue their studies.

For someone coming from a poor and humble background, Chikutse is driven by love and passion in assisting those in need of support. Such is the spirit in him that many people in Mpita look up to him for support in both cash and kind.

Born in 1977 in Traditional Authority (T/A) Njewa in Lilongwe, Chikutse is physically challenged and uses a wheelchair for mobility.

The journey of his life to success has not been smooth-sailing.

“I have gone through a lot to be where I am today and I praise God for letting me overcome all the stumbling blocks that stood in my way,” says Chikutse.

His lowest point in life was in 2003 when he decided to go into street begging to provide for his wife and two children. Life for him was not easy that he could travel almost 10 kilometres every day in search of a livelihood in the streets.

On a lucky day, he managed to make K2,000 through begging but that was not enough to support his family.

After two years in the streets, Chikutse called it quits and took a bold step of venturing into commercial photography by shooting photos of people in various places.

“I used the money I raised from the streets to purchase a still camera,” he says.

Although he lacked expertise in photography, Chikutse committed himself to mastering the trade that he became a household name

“Many people in Njewa invited me to take pictures of them in various places and events and I could manage to realise decent money,” says Chikutse, adding that the only drawback came in when some individuals failed to honour their pay.

It was from the photo-shooting business that the primary school dropout raised enough money to open a small retail shop.

Despite making efforts to improve his livelihood, Chikutse was not entirely free from the jaws of poverty. But he remained focused that things would change for the better.

It was in 2009 when Chikutse joined Mpita Community Savings and Investment Promotion (Comsip) that the winds of fortune started blowing in his way.

Some members of the cooperative, established in 2008, approached and persuaded him to join them.

“The moment I joined I knew there and then that I had made the right decision,” he says.

Mpita Comsip Cooperative is in the saving and credit business and members have the opportunity to borrow money to carry out various businesses.

“The cooperative provided me with readily available capital for boosting my business and I did not hesitate to increase my shares that by the end of 2009, I had 10 in total,” Chikutse says.

Chikutse adds: “I kept borrowing money and bought goods for the shop while increasing my shares. By 2013, I had 50 shares in the cooperative.”

Apart from increasing capital for his shop business and shares, Chikutse used the proceeds and loans from the group to open other businesses.

In 2014, he bought four hectares where he is growing cash crops such as maize, beans, groundnuts and soya beans. He also bought a plot at Biwi in Lilongwe where he built a house which is bringing in an income of K55,000 per month through rentals.

Chikutse, whose current net value hovers around K6 million, says he is diversifying his enterprises by venturing into livestock business through piggery.

“Last year, I bought 10 pigs but unfortunately six died of food poisoning. Luckily, the remaining four pigs are in good health and they might breed soon,” says Chikutse, whose target in terms crop sales this year is projected at around K3 million.

As he looks back to the time from 2009 to now, Chikutse cannot help it but be grateful for the journey well travelled. Financially, the last seven years have been remarkable for him. And the compass of appreciation point in the direction of Comsip.

“I wouldn’t be where I am today if it were not for Comsip,” Chikutse enthuses.

Comsip is a government agency and a union body of various cooperatives in the country established during the Malawi Social Action Fund (Masaf) 3 Programme. Its goal is to encourage communities to develop the culture of saving and investment through groups.

Operations Manager for Comsip Suzan Khondowe says for Malawi to do better, it is up to individuals to adopt the habit of saving and investment.

“The potential to be self-reliant without looking up to government for help is there,” says Khondowe, citing the success story of Chikutse as anecdotal evidence of how cooperatives are transforming lives of ordinary Malawians.

She says Chikutse’s rise to success should inspire other physically challenged people to have ambitious dreams of becoming self-reliant than perennial street beggars.

And for Chikutse himself, the dream for continued self-sustenance is still on.

“My plans for the future include venturing into transporting business as well as buying a personal car for easy mobility,” he says.

Finally a book for Diana Satha