A total of 10 people have been convicted while five have so far pleaded guilty to Cashgate-related charges.

In 2015 alone, there have been seven convictions. But what is clear despite the successes registered so far is the failure by Malawians to appreciate strides the office of Director of Public Prosecutions (DPP) and the Anti- Corruption Bureau (ACB) are making on the financial scandal.

As the year grew older, the 2013 Cashgate, whose details are in the Baker Tilly report of 2014 which revealed K24 billion was stolen, had an opponent. This was a report on the analysis of the cashbook from 2009 to 2013 by Price water House Coopers (PwC) which estimated that K577 billion might have been unaccounted for.

Malawians have always been waiting for the day when who they call the ‘Cashgate big fish’ would be hooked. They have been waiting, and absurdly, they continue doing so.

Cashgate prosecutions and the ‘Theatre of the Absurd’

Twentieth century novelist, playwright, theatre director, and poet Samuel Barclay Beckett, is one of the key figures in what Martin Esslin, a Hungarian-born English producer, dramatist, journalist, critic, academic scholar and professor of drama, described as “Theatre of the Absurd”.

Cashgate’s dramatic effects cannot go unnoticed, neither can its absurdity.

Convictions started in 2014 with three suspects. Tressa Namathanga Senzani was on her own plea of guilty of stealing and laundering public funds totalling K63 million, found guilty and sentenced to three years imprisonment.

Then Victor Sithole, for being found guilty and convicted in K112 million Cashgate, was sentenced to nine years imprisonment.

Thereafter it was business perosn-cum-politician, Wyson Zinyemba Soko, who, for being found guilty of theft and laundering government’s K40.9 million, was sentenced to seven-and-half-years imprisonment with hard labour.

In 2015 seven have been convicted. Maxwell Namata and Luke Kasamba, who were answering Cashgate charges involving K24.1 million, were convicted and in February sentenced to eight and four years imprisonment with hard labour respectively.

In September, he was handed an 11-year jail term, a record Cashgate sentence so far.

In July Caroline Savala, was also convicted of charges of looting public money amounting to K84 million. She is yet to be sentenced.

He moved from the plea of ‘not guilty’, to ‘guilty’ in a case in which he is accused of conniving with 17 contractors to defraud government of K3.2 billion. Another charge involved the purchase of six buses worth K520 million from Automotive Products Limited.

According to the narration of the facts of the case by DPP, Mary Kachale, read in court in August, the money was being channelled to the political campaign of former ruling People’s Party (PP).

But Kachale indicated that according to Kalonga’s confession, there were no direct dealings with the former president Joyce Banda.

“On the involvement of former head of State, Joyce Banda, Kalonga had no direct dealings with her. Most of what he knew he heard from Paul Mphwiyo. Mphwiyo informed Kalonga and others that the money he collected was delivered to State House.

“However, Kalonga states that on just one occasion, he was present when Lutepo deliberately put a telephone conversation he was having with Dr. Joyce Banda on speaker-phone. Thus he once heard him assuring her about bringing more money for campaign,” Kachale said.

Two more, Mkhuzo James Bandula Chirwa and Esnart Ndovi had to change pleas from not guilty to guilty of Cashgate offences.

Savala, Kalonga and Bandula Chirwa are yet to be sentenced while Ndovi, who was convicted in November after pleading guilty of looting government’s K12.9 million was handed a three-year jail term.

It is worth highlighting five people who pleaded guilty to Cashgate charges. Senzani started the trend in 2014.

“The guilty pleas of this defendant, as will become evident, represent a milestone in the pursuit of the so-called masterminds or ‘big fishes’ behind the 2013 Cashgate fraud. We are pleased we have reached this point, manifested by a profoundly significant change of stance taken by the defendant, now a co-operating and hitherto, deeply implicated actor in this tragedy.”

In 2015, a 2011 Cashgate case resumed, with all the people linked to the case brought together to have a case involving 14 people. All of them were answering the case involving theft of about K200 million.

In November, former budget director in the Ministry of Finance Mphwiyo was re-arrested. He was nabbed alongside 17 others before another one, an Information Technology (IT) expert Steve Likhunya Phiri, who Kachale called the brains behind Cashgate, was added to the case.

In the case, the 19 suspects are answering multiple counts of defrauding government K2.4 billion in 2013.

K577 billion vs K24 billion Cashgate: who is fooling who?

Throughout the year, there were also revelations of what is generally thought to be Cashgate which took place during the previous Democratic Progressive Party (DPP) regime and part of the PP regime.

An analysis by PwC on cashbook between 2009 and 2013 revealed that a total of K577 billion was unaccounted for.

However, those suspecting foulplay strongly pressed government to start prosecuting those involved in the ‘DPP Cashgate’.

Instead, investigating and prosecuting agencies are busy with the K24 billion 2013 Cashgate which took place during the PP regime.

The search for Cashgate big fish: Waiting for Godot?

K24 billion Cashgate or K577 billion (or is it K92 billion) Cashgate, nothing matters more than getting the biggest fish in the Cashgate pond. And the wait has been an unending one. Since 2013 only what can be described as small fish have been hooked.

And Malawians keep waiting for the big fish, in the way Vladimir and Estragon were waiting for someone named Godot in Samuel Becket’s play ‘Waiting for Godot’.

It seems we have arrived at an absurdist moment. The wait seems endless.

What we have so far are people just linking what we think is the big fish to the case. Lutepo said former president Banda used her. Kalonga also loosely linked the former president to the plunder. Not much evidence has been given.

And it seems Malawians will absurdly continue waiting for the Cashgate big fish.

In ‘Waiting for Godot’, Vladimir and Estragon wait for Godot for an indefinite period, ad infinitum (forever, without limit). It seems Malawians must also, absurdly, wait ad infinitum for the Cashgate big fish. 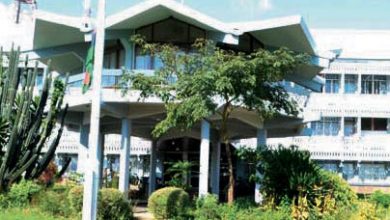