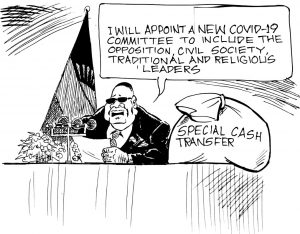 High Court judge Kenyatta Nyirenda in Lilongwe on Tuesday morning sustained an injunction to Human Rights Consultative Committee (HRDC), stopping the 21-day lockdown that President Peter Mutharika announced as an attempt to contain the spread of the Covid-19.

The judge also heavily condemned the conduct of the office of the Attorney General Kalekeni Kaphale who withdrew the challenge to the injunction last minute, with costs.

Kaphale told the media he did not see the need to challenge the injunction because the spread of the virus is self- evident and he thought the judge was aware of it.

But Judge Nyirenda educated the Attorney General that he knew of no legal principle that says because the case is too self- evident then it must not be argued, calling such a thing as outrageous, in the process sustaining the injunction and in effect killing any idea of a lockdown in Malawi as a result of coronavirus.

A few hours after the ruling, President Peter Mutharika followed it up with an address that essentially answered the injunction by reconstituting the Special Cabinet Committee on Covid-19 to make it broad by including other stakeholders such as the opposition, civil society, traditional and religious leaders.

Although short on details, the President also announced that a special cash transfer of K35,000 will be channelled to the vulnerable households that have been affected adversely by the pandemic.

I dare say Mutharika should have made the speech he made on Tuesday night on day one of the fight against Covid 19.

If he did that, we would not have seen the chaos and disunity that have dogged the effort against this dangerous disease at a time other countries are moving steam ahead in dealing with the spread of disease with a sense of togetherness.

I dare say again that had the President made the speech he made on Tuesday on day one, his critics who have argued the fight against Covid-19 has been politicised, leading to court challenge on the lockdown would have nothing to say.

As it is then, that the speech was made late into the fight, the High Court is totally justified to stop the lockdown and escalate the matter to Chief Justice for certification as a constitutional court issue at a time when the number of Malawians affected by the Covid-19 disease keeps on rising as ably and faithfully announced by Health Minister Jappi Mhango.

After all, as said before, Attorney General Kalepheni Kaphale withdrew the challenge to the injunction last minute saying there was no need to challenge it as everyone including Judge Nyirenda was aware of how the disease was spreading and that he did not give an order to stop it.

This was unwarranted rudeness by Kaphale and the State will pay for it dearly.

The no nonsense judge did not buy into the withdrawal and in fact, he did not even consider it hence slapping the AG with costs for the court and insisted that the head of the bar should have done his responsibility.

When all is said and done, the injunction against the lockdown is necessary if only to serve the bigger interests of many Malawians against the raging Covid-19 pandemic and show the Mutharika administration that nothing justifies breaking the law and prioritising politics at the expense of national unity during any crisis.

To put it more clearly, there is merit in the assertion by those who blame government for not forging a united front in the fight against the virus which in the end has undermined the measures to fight it, leading to the injunction against a lockdown.

Then the law has not been followed to the letter, something that has not been lost to the Malawi Law Society which was unequivocal in condemning the Peter Mutharika administration that it is not following it to the letter in so far as this virus is concerned. There is merit in this.

The accusation is that politics is determining the fight against the pandemic as government wants to use it to delay the court-ordered presidential election in July while the opposition wants to make sure the poll is held as the court ordered.

Talking of politics, Vice President Saulos Chilima also addressed the nation this week when he punched holes into how the pandemic is being managed which I thought pushed Mutharika into making that speech on Tuesday night.

When all is said and done, the President should do more on the matter after Tuesday’s unifying speech.

His absence in the fight against the disease, where he leaves everything in the hands of the Cabinet Committee on Covid-19 led by Health Minister Jappie Mhango, is felt among the citizenry, leading to some sleazy rumour mongering which undermines everything.

The address on Tuesday night (by the way why are these speeches always done late when Malawi is half asleep?) should be the beginning of a process where the fight against coronavirus is national and results-oriented.

Mistakes have been made and we have had and heard enough of the disease at a time when other parts of the world are now seeing a window of hope and slowly opening their economies.

The speech on Tuesday should have been made on day one of the fight against the disease.

It could have stopped a lot of things that have gone wrong so far.

Property grabber who turned the page