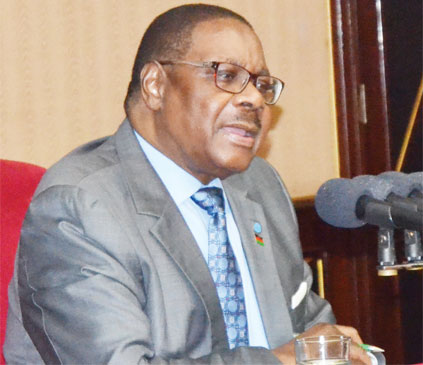 By Thursday this week, Malawi will either have a new president or retain Peter Mutharika at State House. This is certain.

This year’s elections have been the most interesting as nobody—unless you are speaking as a party zealot— can easily predict who will carry the day.

But what perhaps many are not talking about is what will become of political leaders and their parties after the elections. So many things will change.

Mutharika faces the greatest challengers he has ever had in an election. Two of these, UTM’s Saulos Chilima and United Democratic Front (UDF) president Atupele Muluzi were members of his cabinet while Malawi Congress Party (MCP) leader Lazarus Chakwera nearly snatched the presidency in 2014 during the most controversial elections.

Perhaps what Mutharika should hope to shore up his prospects is that he has been a president of restraint—of course despite some frantic podium rants—and has stabilised the country.

But Mutharika’s greatest undoing is the fact that he has presided over a regime of brazen corruption, absolute nepotism and stagnation. And when people decide to remember these, it might as well be doom and gloom.

At 80, Mutharika should not have been very worried at the prospects of losing. After all, a man with over 50 years of work experience, home and abroad, should have accrued enough to last him his lifetime as well as his generations. But he knows that if he decides otherwise, he would leave the party in tatters. The Democratic Progressive Party (DPP) has survived on the Mutharika brand. And when you look around in the party, you would struggle to find a front man with the brand the late Bingu wa Mutharika created.

So if Mutharika losses he can as well jump on the next flight to United States of America to enjoy his pension while the party will be left groping in the dark.

UTM’s Saulos Chilima has brought a new feel in the political arena. Sharp marketing and branding and a youthful appeal. He has tantalised the political scene in the 10 months his UTM came into existence. He, just like the rest, stands a change and he is full of confidence about that. But politics is tricky. What would become of the nascent party if it fails to win the elections?

Two things might happen; UTM might disintegrate hopelessly or it would slip into oblivion. It would be up to Chilima and his lieutenants to hold the fort and continue with their movement for another shot in 2024.

MCP is bustling with confidence like never before. After five straight defeats at the polls, MCP feels sixth would be a curse and this time around they are forming the next government. But if it happens otherwise, then all the energy in the party would be supped.

It will also be last stride of Chakwera’s political career as the constitution of the MCP does not allow one to be its torch bearer if he leads the party to two defeats. So, either MCP would have to rejig its statutes to maintain a face that has given the party a new style and confidence. Otherwise, just as it is with DPP, MCP will have such a huge ask to find a poster boy.

Atupele Muluzi, somehow, blew up a chance to be hot property. Somewhere around 2011, Muluzi came up with an amazing campaign in Agenda for Change. But surprisingly, he ended on a dalliance with People’s Party while leaving UDF affairs to take care of themselves. And if that was not enough, after defeat in 2014 he went to bed with the DPP and served in cabinet for five years.

Atupele practically abandoned UDF for his own fancies. Because of this, all the pace he set with his Agenda for Change sagged and the party has not recovered.

I am not sure if he loses gain, there will be another party to take him aboard. Of course this would be good for him to have a rebirth and awaken the Agenda for Change to stand a chance in the next polls.

As I have said earlier, there is a lot at stake in these election and so many things will change after the circus.

Looking back at 2014 elections