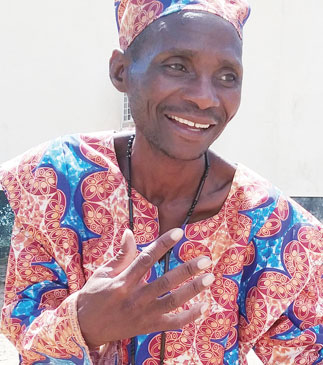 Creativity, which others sarcastically refer to as the realm of fantasy, can be rewarding in real life.

Case in point? The May 21 Tripartite Elections.

While some artists viewed the same as a national— meaning, constitutional—activity, others ‘read through’ the whole event and saw it as a way of ameliorating their lives through arts.

“For example, I am one of the people who used my talent to sensitise Malawians to the importance of voting.

“In so doing, I earned money that would go a long way in sustaining my life,” said veteran artist Lommie Mafunga, famed for ‘Baba Mica’ song that saw him beating the likes of Allan Namoko to become Malawi’s best acoustic musician in the early 1990s.

Indeed, Mafunga crisscrossed the country in this year’s national elections, warning citizens not to dig their own grave by marking ballot papers wrongly.

And— according to an article, on Young African Leaders Initiative (Yali) website, titled ‘Election Time: The Art of Activism’— this is not new.

The article suggests, while quoting a number of artists, that artists can add their voice to the political process.

“My definition of art has always been the same. It is about freedom of expression, a new way of communication. It is never about exhibiting in museums or about hanging it (art) on the wall. Art should live in the heart of the people. Ordinary people should have the same ability to understand art as anybody else. I don’t think art is elite or mysterious. I don’t think anybody can separate art from politics,” Chinese activist Ai Weiwei is quoted as saying.

“Whatever your definition of art, people in all parts of the globe have been finding creative ways to express themselves since history began. Be it drawings or music, paintings or performance, art is in our blood as a species. Yet art can be so much more than just expression. Art is a powerful tool for social change,” the website observes.

“Fairey used the profits of each sale to print more posters and promoted the image online, making it a stratospheric success within weeks, and it is now recognised worldwide as the icon of a campaign that changed US political history,” the Yali website observes, buttressing it with Fairey’s own words: “Creating is about sharing ideas, sharing aesthetics, sharing what you believe in with other people.”

“Some of the most powerful examples are found in the continent of Africa. The artist Dele Jegede began his now celebrated and varied career using satirical cartoons to criticise social and political systems in his native Nigeria. Few subjects have escaped the sharp critique of Jegede’s pen in the last 40 years: from serious domestic issues, like electoral malpractice or a faltering educational system, to subjects further afield, like the African diaspora or the horrors of Rwanda- Burundi.

“Not only has Jegede exerted a principled and empowering influence on his readers by informing and criticising major social problems, but he has also inspired a new generation of creatives to do the same…,” the website observes.

In the case of the May 21 elections in Malawi, theatre was used more extensively than before.

In fact, Ntam President, Eric Mabedi, told The Daily Times of May 21 2019 that he was happy that the electoral body engaged his body.

However, other artists did not wait for Mec to reach out to them. Instead, they took another path— that of singing praise songs for political parties.

In the past, Joseph Nkasa ‘sold’ politicians such as Bingu wa Mutharika, describing him as ‘Mose wa Lero’ [modern-day Moses].

Lucius, who can be described as the pioneer of such songs, earned K3 million after composing ‘Yellow’ for the United Democratic Front in the run up to the 2004 general elections.

In the end, while some contestants in Malawi’s presidential, parliamentary and Local Government elections may go home washing their faces with a fountain of tears, artists like Mafunga have gone home smiling: Call the funds generated trappings of national elections.