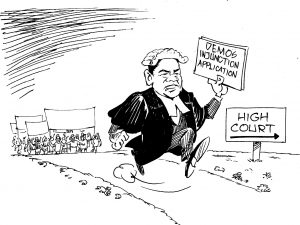 By the time Attorney General (AG) Kalekeni Kaphale was filing an application with the High Court last week to obtain an injunction against the Tuesday demonstration, he must have known in his heart of hearts that it would go nowhere.

Kaphale must have known that High Court Judge Kenyatta Nyirenda was not going to accept that Malawians wanting to speak to power should first of all have K2 billion in their pockets, thereby sacrificing one of the fundamental building blocks of our democracy—freedom of assembly—at the altar of saving the interests of the few.

In the end, even a child recognised that the AG’s move was a short-term strategy for the Democratic Progressive Party (DPP) establishment to stop Tuesday’s protests.

The AG has since appealed to the Supreme Court against the ruling.

In my view, it is such moves that are responsible for the tension that, after announcement of results of May 21 Tripartite Elections, prevails in the country.

With the announcement last week that more demonstrations against the continued stay of Jane Ansah in office were planned this week in Lilongwe, Blantyre and Mzuzu, the government should have used dialogue if at all the noble intention was to stop them and ultimately act on the demand that Ansah has to go.

So far, we have seen some efforts that are yet to bear fruit.

First to be in fray was former president Bakili Muluzi meeting Human Rights Defenders Coalition (HDRC) at his BCA Hill Residence in Blantyre as well as President Peter Mutharika at the State House in Lilongwe.

Then towards the end of last week, we saw a flurry of efforts being spearheaded by Public Affairs Committee (Pac), led by Archbishop Thomas Msusa of the Archdiocese of Blantyre.

This group has so far met President with Peter Mutharika, who told them to also meet HRDC, Malawi Congress Party (MCP), UTM to solve the impasse, something that they did as late as Saturday.

The group, that also plans to meet with the subject of the demos, Ansah, says the ongoing dialogue is not just about her but there are a flurry of issues to address such as the fact that there are fears on the government side that, even if Ansah went, the protesters might seek regime change.

To this, HRDC has said the President must not fear at all as they will not be asking that, arguing they too are waiting for the court case raging at the Constitutional Court in Lilongwe.

In public, the two ‘warring’ parties can say anything to project an image of being tough and digging in into their positions but the truth is we needed this dialogue yesterday.

For any dialogue to succeed, those behind it must be credible and impartial so that they are accepted by the ‘warring’ parties.

Pac, and this time led by Archbishop Msusa, is a credible body that has taken everything head-on in this country including more or less co-governing with MCP in 1992 as the country was going through a process of changing into multiparty system.

It encompasses all religions, and over the years, its effectiveness has tended to depend on who is leading it but it has maintained its respect among Malawians.

Pac’s lowest point was in 2017 when it was duped into dropping its threat to stop followers from demonstrating in order to force the DPP government from tabling the Electoral Reform Bills, especially the proposal that those who win the presidency must score not less than 50-plus-one percent of the vote. Anything else should involve a rerun.

Today, some Malawians attribute the current political problems to failure to enact the reforms Pac championed and they blame the quasi-religious body for putting its foot off the pedal at the most crucial time.

Otherwise, Pac is a credible group to lead the mediation process in the name of nation-building and peace that the country badly needs.

The danger to the process lies in the arrogance, dishonesty and big-headedness of the two sides: HRDC and the DPP establishment

Yet, what the two sides should realise is that the issue is about the country and nothing personal should go into it.

Going back to the AG’s attempt to block the demonstrations, I repeat, it was a good example of lack of honesty coming out of desperation to stop what HRDC dubbed the One Million March on Tuesday.

Since when has the exercise of our democratic rights been a subject of how deep the pockets of those trying to exercise them are?

The case was bound to go nowhere but it was pursued just as a ruse and short-term measure to stop the demos.

In the end, it demonstrates how desperate the DPP government, just like the rest of us are, is to stop these demos so that the country returns to normal.

The only difference is that the DPP establishment is using all sorts of wrong methods instead of dealing with the cause, which is the continued existence of Ansah as Malawi Electoral Commission (Mec) Chairperson.

Then there is another group of church men embarrassing themselves by trying to form parallel structures to Pac and, in the process, some of them distancing themselves from it all.

Church leaders must aim at building what is there and not destroying what others have already built as a self-serving tactic.

There is a court case raging in Lilongwe in which MCP and UTM are challenging election results and legitimacy of Mutharika by asking for nullification of the May 21 presidential election results.

Integrity and impartiality are the only way mediation is going to succeed.

Realisation that the right to protest is enshrined in the Constitution and the need not to put spanners in its works should be the hallmark of a government that is not afraid of people’s power but geared to protect and enhance it.

The move by Kaphale was strange and in bad faith.

Preparing for disaster the local way