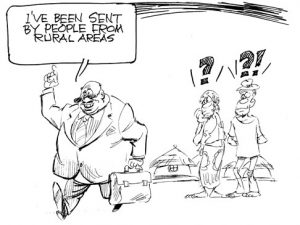 Common people like you and me, we’ll be builders for eternity —The Book of Rules—

Since I attained voting age, I have always had that feeling of importance every time we are cruising to the next elections.

Suddenly, people who all along floated on balloons of uppity learn how to bend their knees. These are people who, not long ago, cruised past us in nonchalant fashion and considered us the scum of the Earth. But look what is happening now.

These are the best times for common people like you and me as we have the arsenal to choose who will lead us after May 21 2019. Already, it is so easy to notice that even the government is working so hard to impress us. The opposition, too, wants to make us believe that this is the time for them to take up the mantle and lead Malawi to the Promised Land.

What, of course, most of us do not know is that the power we suddenly realise we have between now and election time is always there only that we downplay it. We, somehow, choose to live in perpetual servitude and accept to live by the whims of those we consider too powerful to be confronted.

Take, for instance, the example I gave the other day about unapologetic show of hubris by our office bearers. For them, it is alright to do anything and everything without thinking about the taxpayer. Whatever decision they make, no one has the right to ask let alone suggest otherwise. And this is one thing that has dragged the nation to the pathetic state we are in.

It will take a national shift of thought to correct all this. What we need as a nation is a moment of awakening. We need to unshackle ourselves from the manacles of fear and illusion that our leaders are some gods to whom we owe utmost reverence and deference.

The truth is that, these people we call leaders and adorn with honorifics must be our servants, and answerable to us. Look at what is happening now. All of them are coming to us, looking meek, sounding caring and acting benevolent just because they know that we now hold the ace on the decision on who goes to State House.

I know that after May 21, whoever we elect to power will assume that tag of pomposity and the moment that person is sworn in; it will be party time for him or her and his or her cronies. But what I wish Malawians would realise is that we hold the power to make these people account for whatever since they commit.

Three or two years ago, we were forced into a loan to buy some tractors which were meant for some poor farmers. The trucks ended up being sold for a song to affluent public servants. But our children and their children will pay for that. We have people who have become rich overnight simply because they are connected to power and we put no questions to that.

I get really mad, especially on social media when I read posts by people glorifying politics. It really slices my soul that even those we believed were sharp and bright have become damn sellouts who have auctioned their brains and morality.

As long as you are blue, you must never question anything and as long as you are orange, everything orange is right just as red is perfect and yellow is unadulterated. But this will not take us to dreamland.

As a nation, all we need, as I said earlier, is to get mad and accept that it is no longer a luxury to be this backward. We need to know that we have the power to change things and make this country a home where those in power will account for their sins. We need an awakening moment.

Government hits back at Chakwera

Back to silver screen with banger