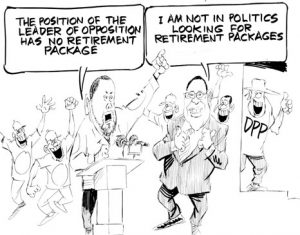 In a blatant show of blind loyalty, MCP and UTM supporters are at each other’s throat, providing fodder for political discussion in this new year as we edge towards May 21.

It all started on New Year’s eve on Monday. The setting was the impoverished Kauma location in Lilongwe where UTM’s president Saulos Chilima held a rally to look for votes in his quest to become president.

In his address, he was belligerent and too cocky, in my view.

He told the residents of the location that, as their neighbour, he was bidding bye to them as he was re-locating to the State House after May 21.

Chilima then took a careful stinging potshot aimed at MCP and its leader, Lazarus Chakwera.

The State Vice-President declared that MCP will never rule this country again as long as it exists because of the party’s ‘poor’ leadership.

Chilima then mocked Chakwera, with, I suppose, a view to silence the Leader of Opposition in Parliament and the entire leadership of MCP from speaking on the new kid on the block that is UTM.

I suppose to show that the position of Leader of Opposition in Parliament is not important and plays second fiddle to those held by people governing, Chilima said Chakwera must concentrate on being MP as the other position is not entitled to a hefty taxpayers-funded pension that the President and Vice- President are entitled to, consisting of plum monthly packages and other luxuries such as cars, security, house personnel and the list is endless.

As was expected, supporters of both parties are up in arms digging in and the social media is abuzz, going crazy in an avalanche of blind support.

MCP supporters are mad and they have rallied behind their man saying he is not in politics as an elitist looking for retirement packages as Chilima wants to suggest but as a servant of the people only looking to serve Malawians.

The supporters have even gone further to remind Chilima that probably this is the reason he has refused to resign from the government despite his fallout with President Peter Mutharika and being no longer a member of the ruling DPP and forming his political outfit that is UTM.

This is an extension of what Moses Kunkuyu and Richard Chimwendo-Banda have been saying that Chilima cannot criticise the DPP government and its excesses as he was part of it for the past four-and-half years.

When I look at all this exchange, followed up by an avalanche of blind support from both sides, I fail to see what the take-home message for some of us – that are rooting for an issue-based campaign that tackles matters that long suffering Malawians care about – should be.

Are Chilima supporters sure that Malawians are interested in who collects pension and who does not from poor taxpayers? Is it really important to talk about Chilima’s resignation from the government when we know he will not resign until May 21 as he htold the nation in the face when the DPP establishment was clamouring for the same?

At the end of the day, as others have observed, the real beneficiary of this senseless exchange of words between the MCP and UTM camps is DPP.

I am sure DPP strategists are smiling from ear to ear and wish long this may last because it makes their job of plotting a win for President Peter Mutharika on May 21 very simple.

They are saying ‘let the enemies cut each other other’s throats and we shall be ready and at hand to collect the trophy they think they are both fighting for on May 21’.

Both sets of supporters are missing a point and, yes, as Jesse Kabwila is fond of saying, it is celebrating and sharing up the carcass before the kill is delivered.

Chilima must respect the job that Chakwera has done for the past four-and-half years in holding the DPP government, that the Vice-President still belongs to, to account for its actions to Malawians.

There is a fact that Chilima cannot ignore and it is this. Chakwera was alone in pointing out the very same issues that Chilima is pointing today about corruption and other governance issues at the time it was not fashionable but necessary to do.

Malawians still remember the stinging speeches Chakwera made in Parliament and at press conferences revealing deep-rooted malfeasance in the same government Chilima belongs to.

Chakwera deserves respect and gratitude and not mockery over pensions.

MCP and Chakwera must also accept that UTM and Chilima are here to stay and will be a huge contenders on May 21.

They have revitalised the opposition and taken the political scene by storm. This must be respected too.

When all is said and done, Malawians are looking for issues and will give power on May 21 to a person that addresses their concerns, ranging from economic mismanagement to the fight against corruption.

Malawians want a president after May 21 who will revitalise the economy and put money into their pockets.

They want a president who will revitalise agriculture so that the rural folks move out of the debilitating poverty they are engulfed in and join civilisation.

Malawians want a president who will stem ever-deteriorating conditions in our hospitals which have simply become waiting rooms for death and not where patients go to be cured of their ailments due to worn-out equipment and lack of drugs.

They are looking for someone who has a plan to sort out the energy problems this country has been experiencing for the past 10 years once and for all.

On the contrary, they are not looking for a president who shouts the loudest at others or is able to mock others in the cleverest way.

Malawians are not looking for someone who is very adept in amplifying the weaknesses of others.

This is what supporters of both MCP and UTM should be advising their candidates.

Assuming that their candidates cannot say or can do no wrong is dangerous blind loyalty that only ends up in perpetuating dictatorships and feeling of infallibility among our leaders.