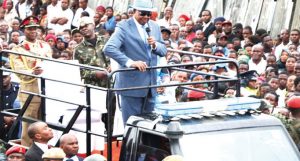 The other day, President Peter Mutharika made a frantic promise that he is going to build two stadiums for two of Malawi’s most followed teams, Mighty Wanderers and Big Bullets.

According to Mutharika, his decision to build homes for these two clubs springs from his love for both clubs. I must confess that after a long time, I have finally found a mortal who loves both Bullets and Wanderers. How that is possible is only for the good professor to tell.

Let us not mince words here. Mutharika’s frenetic promise must never be taken seriously and it is only the kind that comes during campaign period. Mutharika has been the country’s CEO for five years. Is it not strange that suddenly, the big man starts telling us that he has a soft spot for Wanderers and Bullets?

I know some amongst us are naïve and would take the president’s promise seriously. But those who refuse to be drifted in the tides of politics can easily tell that the president’s talk is just another frenzied line that comes in these times when politicians are looking for our vote.

I staggered with laughter and ended up collapsing with shame when Mighty Wanderers and Big Bullets officials held that press conference joking to the world that they had found land on which their local version of Estadio Giuseppe Meazza—alias San Siro—would be built. By the way, is it one stadium for both or one for each?

The virgin truth of all this is that Mutharika, just like others before him and those who will come after him, is only trying to leap from the springboard of people’s desperation.

You need to have a brain the size of a groundnut for you not to realise and accept that the promises being made have a May 21 cut off point. Were we not told that someone would, on the day after being sworn in, jump on the chopper and open Nsanje Port? Is Nsanje Port not just another concrete slab and a bay for famished crocodiles? Maybe someone will tell me that it is only a “dream deferred”.

Four months to the elections is always that season of lies and promises. Pretenders are now in town building some mud bridges, buying and “donating” rickety ambulances and launching football trophies.

A very good citizen should be asking why suddenly these people are acting generously and working so hard to be close to us. These are people who, all along, sped past us in their long convoys of fuel guzzlers and spat on our poverty. Now that it is close to the elections we now count.

Sadly, as former president Bakili Muluzi said, most of us have goldfish memories and can easily be wowed by the same lies and liars.

But what we must know as a nation is that all these promises that are being made to us are nothing but well-crafted lies to dupe us into giving people more power to steal from our coffers.

Malawi has serious problems that need to be attended to other than the silly promises that are being made. Stock-take the past 25 years and what you get is a feeling of dejection that this country has regressed while the rest are cruising to prosperity.

Between now and May, we will have a semblance of a country with less power blackouts, food will be available and hospitals will have drugs. All these will be there just to hoodwink you and me into believing that we have a country.

In May, we have a chance that will make us decide our fate. These trophies, gifts and promises made to us are mere distractions to derail us. We must never be the biblical Esau who sold his birth and eternal rights for ephemeral joys and promises. Let us not sell our country for the ecclesiastical bowl of stew.