Attacking or killing of persons with albinism for rituals in Malawi is not rare.

In the last five years, over 160 cases of killings, attacks and other human rights violations against persons with albinism have been reported in the country, with similar cases also occurring in neighbouring Tanzania and Mozambique.

One in 130 people in Malawi have albinism. In total, the country has over 134 000 persons with albinism. Of these, 40 percent (about 53 000) are of primary and secondary school going age. Yet availing themselves for school means exposure to great danger to their lives.

Torres says the numbers even go lower due to limited schools offering special needs education for children with albinism, many of whom are visually impaired.

Despite their plight, many boys and girls with albinism are defying the odds to remain in school in search for a brighter future. One of such children is Chinsisi Jafali from Kunaunje Village in Salima district in the Central Region of Malawi.

When Chinsisi Jafali lost his father at age 4, many people in his village thought his future had crumbled. Being raised by a single mother in a poor family was always going to be difficult, particularly with small-scale subsistence farming as their only tangible means of livelihood.

As years passed, Chinsisi, a boy with albinism, not only worried about prospects for his future but those of his siblings.

“I have six siblings who are all looked after by my mother,” he says. “Fending for the entire family has been exceptionally difficult for my mother. Her fight for our survival motivates me to go to school and work hard so that I can help my family in future.”

Chinsinsi is now 14 years old and in Standard 5 at Pemba Primary School in the district. Normally, at his age, he should have been finishing primary school in the last class of Standard 8. It is not uncommon in Malawi to have older children in lower grades due to dropouts, starting school late, class repetitions and inadequate learning support.

“I repeated some classes because I was struggling to learn with my sight problem. I couldn’t clearly see things that teachers were writing on the board. But now I sit in front and teachers write in bigger letters than before so that I can read properly.

“My performance in class has been improving which makes me feel good,” he says.

Despite often going to school with an empty stomach as his mother cannot afford breakfast daily, Chinsisi’s resolve to learn is even greater.

And since 2014, his community has been supporting him to safely attend and learn at school. 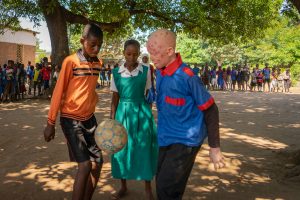 The school’s headteacher, Vincent Selemani, says vulnerable students at the school are now attending school regularly, thanks to a collaboration between the school and the community under the Joint Programme on Girls Education (JPGE) supported by the United Nations and Norwegian Government.

“We used to have poor attendance and performance of children with disabilities, but that has changed,” says Selemani. “Chinsisi is one of the students benefiting from an improved and safer learning environment. He is now able to walk from his home and stay at school without worrying about his safety.”

To ensure safe environments for students with albinism, the school, surrounding communities and the Police have been engaging people to stop violence against girls and learners with albinism. They have also been teaching the students how to protect themselves.

As part of the interventions, Chinsisi and other students with albinism also received an alarm device for alerting people and security authorities when they face attacks.

“I used to be very afraid when going to school and struggling to concentrate on my studies before I received the alarm. Now this is part of my weapons against any threat that comes to me,” he says. 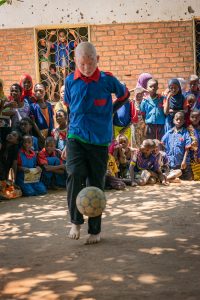 “For any child, anywhere, education is not a luxury. It’s a necessity and fundamental right regardless of their status. Educating girls and children with albinism helps us leave no one behind,” she says.

“Education creates entrepreneurs, a skilled workforce, more consumers and more prosperous communities. A healthy, educated, empowered adolescent girl or child with albinism has the unique potential to break the cycle of poverty for herself, her family and her country.”

Apart from stopping violence and raising the quality of learning, the programme, being implemented in Salima, Dedza and Mangochi districts, also provides school meals to students like Chinsisi and promotes access to youth-friendly sexual and reproductive health services to reduce teen pregnancies.

The interventions have reduced school dropouts from around 16 percent and 15 percent to about five percent for girls and boys, respectively since 2014 to-date. More learners (87 percent) are also attending school, compared to only 73 percent in 2014 in the targeted schools.

With the support, Chinsisi is now more focused on his studies and on track to achieve his dream of becoming a medical doctor and football player.