Lack of skills to handle and store harvested crops is one of the biggest challenges Malawian smallholder farmers face.

A third of their hard-earned yields is lost to rodents, weevils and rotting barely a few months after harvesting.

Imagine what one farmer could do if all that food was not wasted — and now imagine what this would mean if this happened with millions of food-insecure farmers.

For members of the Gwiritse Cooperative in Lilongwe, post-harvest losses are now history. Timothy Katumbu, 60, and his wife Alice, from Mchoka village, used to keep their produce in a locally-made granary and would lose part of that to rodents.

He also struggled to find buyers for his produce, as the quality was damaged by poor storage conditions. Following the construction of a warehouse in his area, he has had a safe place to store his crops since 2016.

“Before joining the cooperative, I was losing at least 10 percent of my produce as I was using ineffective methods. Through the cooperative, I have learned improved technologies and practices that have helped reduce the grain loss and now I make more profits,” Timothy says.

“I’ve also learnt to keep records which helps me understand better how much profit I make, record my expenses and plan better for the next season. Since I joined the cooperative, I’ve seen the power of numbers. Now, I farm for business not just to feed my family,” he says.

“I also receive crop price text messages on my phone which help me make sound decisions on where and when to sell my produce,” concludes Timothy.

Rufina Deodatu, 44, from Khalachulu Village joined the Gwiritse Cooperative in 2016 and started storing her produce in the warehouse in 2017. Unlike in the past, through the cooperative she now has access to loans.

“Previously I was selling my produce to vendors who always dictated the prices. Being an individual seller, I had no power to negotiate better prices. Since I joined the cooperative, I’ve seen the power of numbers: we can negotiate better prices with traders — if one declines, we move to the next till we get right prices for our produce,” says Rufina.

“Before, I would struggle to buy even soap, sugar,

cooking oil and other food needs. Now I can afford these. I can comfortably pay school fees for my four children,” Rufina adds.

“I’ve used part of the money from previous years to buy livestock. I sell the livestock to buy fertiliser. I also use dung from the livestock in my gardens,” she concludes.

Through this project, which started in 2011, participating farmers learned new skills and were advised on how to access markets. As a result, farmers like members of the Gwiritse Cooperative have managed to leap out of poverty and hunger and are now equipped to be competitive players on the markets. 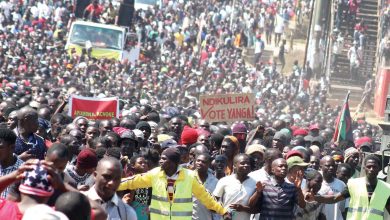