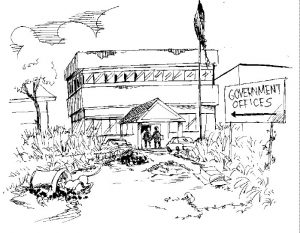 Sometimes as people, our level of attachment to disorder is quite baffling. Infact nowadays, it is no longer unusual to see a Malawian going about, unperturbed, regardless of the social ills within their immediate environment.

This is why I was happy when I heard in the course of the week that Vice President Saulos Chilima, who was up North pushing the Public Reforms agenda, called out the authorities at Mzuzu City Council over the appalling state of the city in as far as sanitation and waste management is concerned.

I am glad that this sanitation issue has re-emerged. It was on this very page a year or two ago that I lamented how pathetic most of our surroundings are, including places where there are government buildings and offices, and nobody seems to care. I mean, how can one ably work or relax while in a filthy place, surrounded by overgrown glass? I hope you get the picture.

We should not, for a minute, pretend that the ‘green’ city of Mzuzu is sailing all alone in this boat. Just take a look around the neighbourhoods, especially the shanty towns, and you would likely be greeted by a very unpleasant stench which will make you appreciate just how low the hygiene standards have sank. Aside from those at town and city council secretariats sleeping on the job, I certainly have a bone to pick with city fathers or mayors. If there was one activity that we can certainly use as a yardstick to gauge the performance of our mayors, then hygiene and waste management should be top of the list. I can still vividly recall how tirelessly former Blantyre City mayor Noel Chalamanda greatly galvanised both residents and organisations of the city into rallying behind the ‘Keep Blantyre City Clean’ campaign, which was launched in November 2014. You should have seen how, all of the sudden, the fauna and natural beauty of the commercial city quickly grabbed headlines, both home and abroad. What is it that I am saying? Well, I am putting it matter-of-factly that our mayors, ward councillors et al have been a big letdown because they were supposed to be in the fore front rallying the community in campaigns of such nature. I know there were also such initiatives during the pre-democracy era, from the flashbacks shared now and then on ‘We were there’ page in The Daily Times. We need, as a matter of urgency, to bring back contests between residents for the most beautiful surroundings in order to re-ignite the passion in everyone to care for their environment.

Speaking of passion, it was quite a pleasant site the other day when residents of Area 24 and 22 in Lilongwe, led by environmental enthusiasts, went about clearing up huge mounds of garbage that had accumulated under a certain bridge adjoining the two locations. This is the spirit that needs to be encouraged, even Minster of Forest Nancy Tembo could not help but join in the ‘kantole-tole’ exercise.

It is a pity that while such efforts are sprouting in the Capital City, there still are some companies that are irresponsibly discharging waste. Government had no choice but to crack its whip on Sunseed Oil Company, which has been carelessly discharging waste emanating from its production plant. It should not stop here; we need to name and shame any other organisation that falls into the same trap.

Time is nigh for everyone to play their part in protecting the environment around them. Since timing is everything, how about giving serious consideration to the niggling thought of ‘Youth Week’ where pupils can actively participate in caring for their surroundings? We need to seriously breathe life into the environment.

Forget not, the elderly

This other day, I received a phone call from an elderly person (he used to work with my dad at the Civil Aviation Department many years ago). It was to do with the campaign promise by political leaders to introduce a monthly pension allowance (If I am not mistaken, pegged at K15,000) for the elderly.

“Kodi zija za pension zili pati?” (Where is that issue politicians talked about regarding pension for older people?). I took some minutes recollecting the subject; remembering that it was indeed the Tonse Alliance, through Vice President Saulos Chilima, who made the pledge.

“Zimenezo ndiye kuti akulongosola, paja analitu a Tonse analonjeza,” (I am sure it is being taken care of, since Tonse Alliance is now in government) I finally responded.

I recalled this conversation last Tuesday while with some colleagues. There is so much that we (meaning those in youthful years) take for granted but certainly means much more to others. It is therefore my prayer that while the new National Budget is being fine-tuned, that component of a monthly allowance for older people will be accommodated.