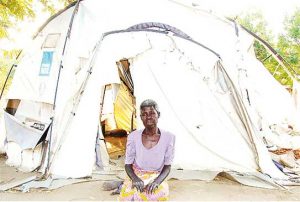 Towards the end of 2014, Awene Sakha was left homeless and miserable when devastating floods swept her home and entire livelihood.

Close to three years now, Sakha is still reeling from the effects of the natural disaster that unleashed its wrath on several villages in Chikwawa.

Some people affected by the same floods have moved on. But Sakha has not. She is an elderly woman in her 80s and fetching for basic necessities is not an easy task for her.

After the floods were declared over, Sakha was among those that were given individual tents as temporary shelters. But for her, it has become a permanent home.

“I have no place to go or the strength and resources to build a decent home for myself,” says Sakha, who lives in her home village of Mpangeni in Traditional Authority (T/A) Mulilima in the district.

The tent looks tattered. It has weathered many sunrays and winds and it is almost falling.

Inside the tent, there are a few tins for her personal use and one can hardly see a small mat where she lays herself.

In all this suffering, one would think of turning to close relatives for help and Sakha has one. It is her only surviving daughter who cannot take care of the old woman. The girl is mentally challenged.

“The floods struck during the day. I lost everything and all I could see was death,” she says while being grateful to rescue operations that took her to safety.

But the happiness for survival was short-lived as she had to start a new life from scratch. Time passed and turned into years of stagnation in biting challenges until January this year when hope for a change shone on her.

A new intervention to build resilience in the elderly during and after natural disaster shocks brought hope to Sakha and the rest of vulnerable people in her area.

From January to July this year, Malawi Network for Elderly People’s Organisations (Manepo) partnered with Malawi Red Cross Society (MRCS) to pilot a project aimed at expanding collaborative approaches to address the needs of the elderly to prepare for and respond to drought and floods.

Chikwawa Red Cross Project Officer Cecelia Banda says the project was more of an advocacy initiative focusing on revealing challenges the elderly face when natural disasters strike and calling for well-wishers to support them where they can.

“The elderly are the most marginalised group and are usually isolated by society. During disasters like floods, they are the most affected, hence requiring support and care,” says Banda.

MRCS and Manepo implemented the project with funds from a UK-based organisation called Humanitarian Leadership Academy.

About K3.3 million was pumped into the seven-month project in Chikwawa alone.

According to Banda, the project was being implemented in two districts of Chikwawa and Phalombe.

In Chikwawa, the project was in T/A Mulilima with two group village heads of Mtwana and Kajawo as the target areas.

Mulilima area is prone to floods because it is surrounded by Likhubula, Chimwafisi and Mthamphumphu rivers which carry water from the upper areas of Blantyre and over-flow during the rainy season.

The area also faces dry spells which impact heavily on crops community members grow, leaving the people with little or no harvest at all.

Apart from providing materials like cement to the elderly for construction of their new homes, the project also distributed blankets to 75 elderly persons.

One of the outcomes of the project was the establishment of committees that will look into the welfare of the elderly.

“These committees will give elderly people the mandate to speak up for themselves,” says Banda.

Through the project, there is now an improvement of political will among leadership at local and traditional level.

Some village chiefs are taking steps towards enforcing the protection of elderly people in their areas.

One of the chiefs is Group Village Head Mtwana in same area of Mulilima who has, for several times, mobilised village heads under his jurisdiction to fight against any form of abuse and discrimination against elderly people.

“We want the elderly to enjoy life like anyone else. As chiefs, we will ensure that they are a priority on any intervention or support from government and other organisations,” Mtwana says.

Juma says the project also conducted awareness raising activities with the communities and organisations to promote attitudes and behaviours that enhance social and community inclusion of the elderly, especially during disasters.

As the pilot phase of the project winds up, Juma calls for continued support and care for the elderly at all times.

“It is the duty of every Malawian to reach out to the elderly not only during disasters but also during ordinary situations.

Let us not isolate or abuse them, we are young today but each day we live drives us closer and closer to old age,” Juma says.