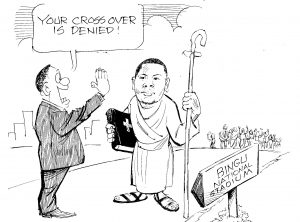 Whoever felt very bad and, still does, in the Tonse Alliance government about Prophet Shepard Bushiri, that he instructed a hapless Bingu National Stadium (BNS) manager to stop prayers the prophet planned as crossover to the New Year, has missed one basic point about Malawians in the past twenty six years.

That point is that since the 1993 referendum when Malawians voted for human rights, they have defended those rights jea during the past 26 years.

What has come out very clear since then is that Malawians, in an event of any human rights abuse by those in authority against an individual, they will defend that individual with all their might, .

It is not every Malawian that follows or believes in Bushiri as a religious leader. Not every Malawian is his admirer. Very few of us understand or follow how Bushiri has accumulated so much wealth to the point of flying his own private jet when, as a nation, we cannot afford one for our President that all we do is still rumour-mongering that Dr Lazarus Chakwera has actually secretly bought one for himself—a total fabrication.

But I digressed. The issue is that Bushiri is an enigma to most of us but it does not matter because he does not live on our taxes.

That is why when news came through a couple of weeks ago that Busihiri has bolted South Africa due to his numerous legal problems and that he is on home soil, the Malawian in us was on high alert and all we could hope for was the best for him as he fights his extradition into the Rainbow Nation to be tried for the crimes they are accusing him of, come rain or sunshine.

His claims and assertion that he cannot get a fair trial in South Africa, and that his life as well as that of his wife, Mary, are in danger there hence their decision to flee to home, should not be dismissed off hand.

Let us face facts squarely in the face. No one waits for a bullet in their head, whether they are accused of whatever horrendous crimes they might have committed.

But all this is neither here or there.

The non- negotiable reality is that Bushiri is in his home country Malawi whose citizens enjoy constitutionally guaranteed rights and these include the right on how to worship their God.

A couple of weeks ago, Bushiri booked BNS for December 31 in Lilongwe for his mega cross over function that used to be at Johannesburg’s FNB Stadium all these past years and they were massive that they even attracted foreign tourists to the Rainbow Nation.

Apparently, someone in the Tonse Alliance government does not like Bushiri and so BNS wrote a letter to Bushiri’s communications manager Ephraim Nyondo rescinding the decision to hire them the stadium.

Among the lies being deliberately peddled in that letter are that the stadium will go through rehabilitation due that same time, in readiness for CAF inspection to host international football matches.

Covid 19, that readily available excuse, has also been thrown into the mix and the conclusion is that the stadium management has gone back on its word to give Bushiri the permission to hold the function at BNS.

The simple question that the BNS authorities must answer is: When did they know that CAF wants to do an inspection and who said the stadium is for the exclusive use of football only?

This is a stadium that is a white elephant which has stayed idle for a whole year except in February when it hosted SDA global leader Ted Wilson despite the fact that there is a $70 million dollar bill which we taxpayers are paying to some Chinese bank for its construction.

Meanwhile, Ministry of Sports has to struggle to pay for its utilities such as electricity and water, leading to disconnections more often than not.

As I am writing this, the stadium is depreciating at an alarming rate for the simple reason that football has largely shunned it because its rates are expensive for obvious reasons.

You would have thought that Bushiri’s overnight jaunt was a God-given opportunity for the stadium to pay some of its bills.

Generally, business in Lilongwe could have received some boost from Bushiri enthusiasts who are ready to come for the cross over.

Yet, alas! Someone in government probably thinks he can use the stadium to settle some scores with Bushiri using CAF as if it owns stadium and Covid 19.

I thought there are laid down procedures on how to avoid the virus when in a crowd and that is how Malawians are still gathering including watching football?

So it is only Bushiri who must be stopped from gathering with other people? What an injustice!

It is wrong on principle and morally repugnant even to those Malawians that do not share Bushiri’s beliefs and his methods of exercising his freedom of worship.

Yet President Lazarus Chakwera has promised the nation total rule of law and that has largely reflected in how Bushiri’s cases have been handled including the extradition request from South Africa.

It cannot end just there.

Bushiri must enjoy his full rights while the fight against his extradition to South Africa rages on.

The government system cannot choose which rights to accord him and which ones to withhold.

It is wrong and Malawians will always side with the oppressed, especially when it comes to government officials.

This is a sprit that has been entrenched throughout the years and which Chakwera himself acknowledged as being responsible for his election when he was being given the Sword of Command at Malawi Defence Force (MDF) headquarters in Lilongwe in June.

When there is injustice and oppression, everybody rises, speaks and acts to stop it in Malawi.

To stop Bushiri from doing a mere crossover with those who believe in him is an injustice that must not be allowed to stand because he must enjoy his full rights just like the rest of each one of us—Malawians.