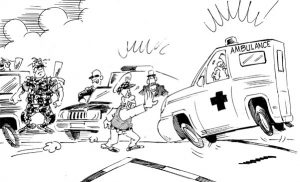 Who can blame them? After all, it is now less than four weeks to polling day—the Judgement Day.

The President attacked the Central Region to debunk the myth that it belongs to MCP.

So, he went about on a whistle-stop tour in Mchinji, Kasungu, Lilongwe and Ntchisi, among other places, where he asked voters to retain DPP in power for development to continue in this country.

The President also promised to upgrade Mchinji to municipality status and build seven secondary schools in the district.

Chakwera was in the Central Region too where he described DPP manifesto as nonsensical saying it cannot be promising zero tolerance on corruption when, in the last five years, the evil has worsen with looting at Police as well as K236 billion loss of money – as per National Audit Office audit – unresolved

Chilima, on the other hand, made a stinging attack in Blantyre and Neno on parastatals such as Malawi Communications Regulatory Authority (Macra) and Malawi Revenue Authority (MRA) that they are abusing their resources by funding campaign of the governing DPP using what they are calling operations budgets.

Related to Mutharika’s campaign is the fact that Police cleared a driver of an ambulance who was detained for disturbing the presidential motorcade, which was on its way to Kasungu for the campaign meeting.

The driver had on board critical patients from Area 25 Health Centre and they were being ferried to Bwaila Hospital on referral.

To save the lives of the patients, the driver drove straight into the road through which the President was supposed to pass when all other vehicles were stopped.

Then, you have the police having a bad patch after pathologist Dr Charles Dzamalala released a post-mortem report that has revealed that Buleya Lule, from Mitundu in Lilongwe, was murdered in police cell through electrocution after the police arrested him in connection with attacks on people with albinism, specifically the missing and abduction of a 14-year-old boy, Goodson Makanjira, in Dedza.

Probably, nothing counts better to show that the campaign is getting hotter and hotter than the verbal war between Chilima and Minister of Information Henry Mussa over accusations that the latter made that MRA and Macra are funding the governing party’s campaign.

Mussa, in reply, said Chilima should stop making these accusations; otherwise, government will be forced to reveal what is in the Veep’s closet.

Chilima did not swallow the bait to be silenced.

Instead, he replied that they should go ahead saying he has evidence on what he was saying.

At the end of the day, Malawians will sift through these things and separate chuff from wheat.

At the end, the conclusion is the same old story of parastatals being abused by governing parties, which must stop.

The hope is that, one day, a president will be elected, who will be reformist enough to stop these abuses because parastatals and State corporations are not supposed to be helping ruling parties, especially in the electoral process.

And talking of abuses, when you see some things happening at this crucial hour, you tend to wonder whether DPP is not aware that this is an elections period; therefore, certain blunders ought to be avoided at all costs to avoid losing votes.

Let us take the issue of the presidential convoy against the ambulance racing against death; carrying patients on referrals.

It is no brainer that nothing can stand in the way of saving a life, yet some police officers with the support of a whole establishment proudly said they had reprimanded the ambulance driver who was trying to save lives.

Did the President and First Lady Gertrude Mutharika condone this? Does it mean his passing was important than an ambulance taking to the hospital poor people from whom he is seeking votes and re-election? Does it mean Mutharika likes the status quo of the presidential convoy when it inconveniences Malawians? Does it mean the cries of Malawians about the inconvenience of the motorcade on the roads land on deaf ears??

How many times should Malawians complain that the management of the presidential convoy leaves a lot to be desired and which president will change this?

The consolation is that MCP and UTM have made management of the presidential convoy an electoral issue by including it in their manifestos.

The bottom line is that Malawians are concerned about long presidential convoys, full of expensive cars at a time when other countries have dealt with it long time ago and citizens mingle with their leaders.

Police reprimanding an ambulance driver in favour of the presidential convoy is travesty of the highest order.

Another travesty of equal measure is police brutality.

The police duty is to investigate crime and bring those suspected of committing them to book by prosecuting them and letting the independent courts decide their fate.

Nowhere in this chain does it say the police are supposed to kill people as the nation woke up to this other day after Dr Dzamalala released a post-mortem report on Lule’s death.

As citizens, we should not accept the blatant murder of Lule as he should have been left alone to live and go through the court process.

As a country, we would have known whether he knew something about the missing of the innocent boy in Dedza.

Malawi Human Rights Commission has done a marvelous job to insist and pay for the post-mortem Dr Dzamalala conducted on the body of Lule.

But now it is time to demand justice and punishment for those elements in Police who murdered Lule.

For DPP, I do not know what they are up to and what they will do to the police officers who did this.

So far, there is deathly silence from both Police and Ministry of Homeland Security, probably being afraid of the public backlash and wishing that the matter should just die a natural death, which should not be allowed.

All in all, the campaign is getting hot and the exchange of views and words getting sharper by day.