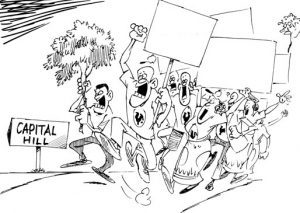 Talk to any regular Malawi Congress Party (MCP) supporter, or Lazarus Chakwera’s diehard supporters on the streets of Lilongwe or Dowa or Karonga for that matter, and chances are that you will be confronted by an angry individual who will swear by his or her mother’s grave that Democratic Progressive Party (DPP) stole their outright victory from them in broad daylight on May 21.

The focus of the anger will switch from the victors, DPP, to Malawi Electoral Commission (Mec) and then it will be personalised to the chairperson of the electoral body Jane Ansah, who has taken some amount of unwarranted vitriol and hate speech even on social media. I will come back to this.

But, as we have seen this week, all the anger that MCP supporters have about what they consider electoral victory stolen from them came down to countrywide demonstrations that reached their peak on Tuesday this week when the seat of government, Capital Hill, in Lilongwe was brought to a standstill and civil servants had to knock off early after the protesters demanded a shutdown.

It has been the case throughout this week, with tear gas being the order of the day at MCP headquarters at City Centre in Lilongwe and running battles at Capitol Hill.

President Peter Mutharika won the elections, according to Mec, by 38 percent and what it means is that 62 percent of the five million Malawians that went to polls on May 21 rejected him.

There were outright irregularities during the elections and it has been encapsulated in the use of correcting fluid, Tipp-Ex, on some result sheets, transmitted to Mec which the electoral body has not fully dealt with.

Instead, Mec went on to announce the results while being evasive on what the electoral body did with tainted results that needed a thorough probe.

Mec has accepted such results. It is this which MCP supporters and, indeed, UTM followers are angry about.

During the week Mec announced the results, Ansah used the word subjudice to run away from being accountable to Malawians and tell them whether the tipp-exed results were part of eventual results that they used to declare President Peter Mutharika on May 27 winner.

Until now, Mec has not done this. During the last press conference when Mec announced the presidential election results and declared Mutharika the winner, no questions were fielded from journalists.

By all standards, Malawians whose candidates did not do well, according to Mec, have genuine concerns and, no wonder, both MCP and UTM have taken this and other matters to court.

I suppose it is there where Mec will fully account to Malawians how it ran the May 21 elections, especially in terms of counting and tabulation of votes. It is there where we will also know whether the will of Malawians had been tampered with. Meanwhile, Malawians are waiting.

But as they are waiting, MCP followers are protesting and they are running battles in Lilongwe and other districts throughout the country.

It all depends on the resolve of the protesters and the organisation behind them and what they intend to achieve.

But unless otherwise proven, post election protests in the country have consistently shown that they are the process of processing the loss and tend to fizzle out as the country moves on from the trauma of polls.

My bet is on the case in court and it is there that MCP and UTM should concentrate on so that they get the justice not just for their leaders but all Malawians.

I know the case will rage for the coming months and will go all the way to the Supreme Court.

But make no mistake about this. Malawians that are pouring on the streets of Lilongwe have a right to do so. It is their entitlement that nobody, including Mutharika or Police, can take away from them.

They can stay on the streets as long as they wish to do so. It is their right, I repeat.

Let me now turn to Ansah. Malawians are entitled to comment on her performance as chairperson of Mec. She was doing that job not just for her family but for the rest of Malawians.

She must be accountable for her actions as chair of Mec.

However, that accountability does not mean vitriol, threats and other forms of harassment that we have seen being thrown her way on such forums as social media. It is not just Malawian.

At the end of the day, she is a Supreme Court judge, mother, wife and many more.

She deserves respect and is entitled, just like the rest of us, to dignity as a human being.

This is what we, Malawians, sometimes miss in the heat of our differences.

We throw all decorum to the wind, which is not necessary, in the name of dealing with our political frustrations.

This is 21st century. Let us sort out our differences in a civilised manner.

Hands needed on the wheel