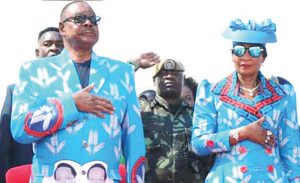 I will not keep the truth from my song.

I will not bar the voice undressed by the bees

From entering the gourd of my bow-harp

I will not wash the blood off the image

I will let it flow from the gullet…

I will not clean the poem to

I will not bend my verse into

The bow of a praise song.

I will put the symbols of murder

In the centre of my crude lines

I will undress our land and

I will pierce the silence around our land

And I will point the light of my poems into

the dark nooks where our people are pounded

I will not coat my words in lumps of sugar

I will serve them to our people with bitter quinine:

I will not keep the truth from my

I will thread the voice from my broken lips

Through my volatile verbs that burn the lies

Two weeks ago, Democratic Progressive Party (DPP) organised a grand ceremony where they presented their well-woven mother of all lies which they christened 2019 manifesto.

They were the last after the Malawi Congress Party (MCP), UTM and United Democratic Front (UDF) had unveiled theirs. Interestingly, UDF— which has been a bedfellow of the DPP for the past five years, decided to unveil its blueprint on the same day the DPP did.

All said, no unveiling of the manifestos was treated with grandeur and immense pomp such as the way the DPP did. And the measure of grandeur and pomp that accompanied the unveiling is equal to the lies that are in the document they call manifesto.

Five years ago, Malawians—a minority of them, though, thanks to our voting system—decided to give Peter Mutharika and the DPP a chance to run our affairs. And they have done it with all acumen of how a country must never be run.

When you flip through the DPP manifesto of 2014, you would be easily disappointed how the party has failed even to fulfil 30 percent of the promises made then. If at all the DPP was an honest grouping, all it was supposed to do was reprint the 2014 manifesto and tell Malawians that it will finish the rest of the projects if given another five year mandate.

For the DPP to come up with another manifesto which makes illusory promises to Malawians is a damn insult to the nation. One needs to have a brain the size of a badly-grown groundnut to believe Mutharika and his DPP lies that given another mandate, Malawi is going to transform into the level of some advanced European country.

Mutharika and his DPP should know that Malawians are not as sleepy as they are known to be. Much as we are well known for being a nation with goldfish memory, but we are not dead to the truth that the past five years have been terrible for most of us. Only those close to the state house have been living in paradise while you and I have been made to have a dress rehearsal of life in hell.

Mutharika has enormously failed to loot out brazen corruption that has been the hallmark of his tenure. He knows, surely, how corrupt his people have been and he seems good with it. We know of people who have become overnight billionaires simply because they are close to the throne.

It beats me, I must confess, to have the mere thought that, after messing up the country, someone still has the audacity to boast that they are the best thing ever to happen to Malawi. God help us!

And then, when you read the MCP, UTM and UDF manifestos all you find there are a list of lies crafted to dupe Malawians. What these will not tell you is that, just as is with the DPP, they too have vultures waiting to get to power so that they rip the nation off the little it has.

If you ask me, all these manifestos are just booklets full of chapters of lies.