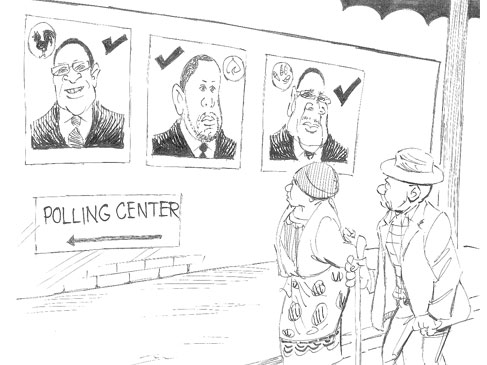 In a few hours from now, it will be illegal for any form of canvassing for votes by competitors in readiness for Tuesday’s polls when Malawians will be choosing president, members of Parliament and councillors for the next five years.

Mutharika is wrapping it up at the political arena, Njamba Freedom Park in Blantyre, while Chakwera and Chilima will both hit Lilongwe today.

There have been long and arduous five years for the life of the Mutharika administration and Malawians will now get a once-in-five-years chance to pass a verdict on whether to retain it in power or choose the challengers.

The administration has been accused of all sorts of things, high among them is corruption and general incompetence.

Mutharika has retorted back and claimed to Malawians that this is not true despite the abundance of evidence.

During the campaign and even before, both Chakwera and Chilima have harped on this in good measure and it will be seen on Tuesday whether it sank in the minds of Malawians or they considered it as the ranting of jealousy opposition figures who merely want a seat on the government gravy train.

That said, Malawians will have a clear choice on Tuesday, choosing one individual out of the three top candidates.

If they want a dashing candidate who will make dashing decisions and will not be afraid to shake up the system, then they have Chilima to choose.

Of course, Chilima would be bad news for the DPP establishment as he has consistently washed, in public, all the dirty linen of the system he was part of for the last five years, to the extent that he has named and shamed all engaging in shenanigans in government and State companies

As I am writing this, leaderships of such organisations in government should be praying that Chilima does not come out victorious on Tuesday.

But there is another choice. If Malawians want to try a former reverend as president believing that he is God-fearing and probably would have honesty and integrity in running the affairs of government, then that person is Reverend Dr Lazarus Chakwera, standing on the MCP ticket.

For the past five years, he has spoken on behalf of Malawians in and outside Parliament. He stood firm to hold government to account for its actions and continued to do so even during the three months official campaign period.

While not exactly dashing like Chilima, change, that is measured and methodical, would surely come to government affairs with a Chakwera presidency.

Then, there is the President himself, Mutharika. If Malawians are happy with what has gone on during the past five years and are looking for the same laid-back leadership, then he is the choice.

The belief is that development in Malawi is happening but, behind, there is an unassuming leader, a driver, who is making it happen and that the evidence are the roads and buildings, most of them donor-funded, that we see in Blantyre, Mzuzu, Zomba and Lilongwe.

The point I am making is that the differences between the three top contenders are day and night and if it were up to their qualities and ability to perform, then it is as I have described them in the foregoing.

Yes, during the past year, we have seen and heard all of them promise heaven on earth but there was one commonality: All of them lied because they all promised the moon although they never told us where they would get the money to fulfill the billions upon billions of kwacha (even dollars) worth of promises they were making.

For the sake of the elections, we would be safe to forget their promises for the moment and just concentrate on who they are in order to decide who should lead this nation for the next five years.

I wish I had said that was the end of the story but, unfortunately, it is not because standing between it is the issue of tribalism, regionalism, religion and other factors that determine elections in Malawi.

Then, there are demographic factors that are determining elections these days. These too will also have a say on who goes to the State House.

Who will the technologically obsessed youth who spend their lives on social media vote for? What about the women who constitute over half of the population?

Who will they support and why?

Then, there is rural and urban divide. How will the dynamics play as regards the rural folks who have better things to do than spend hours on end on Facebook but will vote all the same and they are in majority?

As individuals, Chakwera, Mutharika and Chilima are clearly different and represent different aspirations for this country. Their leadership styles would be different.

There is no voter who, by now, does not know these differences.

The choices are clear

Be wary of fake news