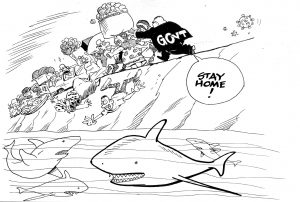 President Peter Mutharika’s act on Tuesday night to announce a 21-day lockdown as an attempt to contain the spread of the Covid-19 simply means one thing: He has fed Malawians to the sharks.

He has endangered not only the livelihoods of those that famously live from hand to mouth but even those Malawians on salaried jobs.

Among other things, movement of people will be restricted and central markets will be closed, only leaving those in locations.

The question is: how will those location markets get goods such as simple tomato which is grown and sourced from somewhere else, such as Dedza and Ntcheu?

All this hullabaloo is happening at a time when confirmed Coronavirus cases and even the number of death as result of the virus in the country has been kept low so far as per confirmed figures through the Special Cabinet Committee on Coronavirus.

The critical question to be asked should be: Is the lockdown necessary when we know cases and deaths are still low compared to other countries that have not even implemented such draconian lockdowns?

With a stroke of a pen, the President has put poor citizens that survive from hand to mouth under the moving bus.

In an attempt to save lives from the clutching claws of Covid-19, the President has just flipped the coin and handed Malawians over to another life threatening conditions of poverty as a result of loss of earnings for 21 days.

Make no mistake, jobs both in the formal and informal will be lost.

In other countries where lockdowns have been made, governments are even feeding their citizens or reducing taxes such as Pay As You Earn to put money in their pockets as result of their loss due to lockdowns.

The President said nothing about this on Tuesday night.

In case government does not know, the reality is that the economy has essentially been shut down at a time governments in both Europe and US, which have been hard hit, are anxious to open theirs to minimise the damage to their people.

Here government has fed the citizens to the sharks without enough justification.

The citizens have not been cushioned against anything against the effects of the lockdowns.

There are neither bailout packages nor stimulus packages on the ground.

How does the President expect poor folks in Ndirande, Kawale or Mzilawaingwe to survive?

Who is advising Mutharika on the pandemic that they cannot see that the lockdown is essentially killing people by hunger?

Mozambique, Zambia and Tanzania are all our neighbours who have resisted attempts to copy and paste what others are doing and have not implemented any lock downs preferring instead to close borders and implement other measures.

Are we hit harder or being cleverer than them?

Going through the dos and don’ts, it is very clear that we even do not have a spine to develop our own guidelines but copying pasting what others are doing both in Europe and Africa including the 21 days of lockdown.

Why not 10 days or 15 days? Has the World Health Organisation (WHO) proscribed that lockdowns can only be 21 days?

The above said, it is a fair thing to say that probably government is using Covid-19 to slow down the process of the presidential election which the Constitutional Court ordered.

But in the course of doing so, government is neglecting its responsibilities towards safeguarding human and economic rights of Malawians as they are busy ordering the lockdowns.

In the end, when everything is said and done, this battle against Covid-19 will not be won because government is antagonising Malawians by using the pandemic to achieve selfish political ends.

All the measures government has put in place can only work if we all believe they are being done with good intentions.

Adding more measures everyday assumes the ones in place are not working but there is no evidence of that happening on the ground.

Infections have been comparatively low when looked against other countries in Europe, for example.

Why is it then that we need a lockdown?

It is not a blank cheque for government to impose restrictions using the disease as if Malawi is a banana republic.

The reality is we are not a law abiding country.

Government is ordering us to disrupt our normal lives. It will wear us down and there must be justification.

Our livelihoods and jobs are on the line.

As already said while in other countries, governments have tried to help citizens to cope with the repercussions of lock downs, our government is eerily quiet on it.

They would rather let poor people die of hunger as they stay locked up in homes for 21 days without enough food.

At the end of the day, it is not Corona that government is dealing but fear for the election.

Is it not surprising that as soon as the President announced the lockdown on Tuesday, Malawi Electoral Commission (MEC) chairperson Justice Jane Ansah ordered a stop of voter registration taking place in some districts including Blantyre?

The truth is government is feeding Malawians to the sharks as it pursues the agenda of delaying as much as possible the presidential election that was ordered by the Constitutional Court and whose appeal was heard this week in the Supreme Court.