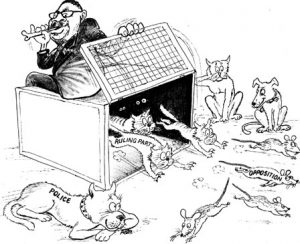 When ruthless Democratic Progressive Party (DPP) operatives assaulted UTM director of youth, Bon Kalindo, those who care about the peace and tranquillity of this country expected that the government, perhaps led by President Peter Mutharika himself, would publicly condemn the attack without waiting for another unsuspecting opposition party supporter to meet the same evil act.

Well, our government is slow to act. Sometimes, it never acts at all, especially if it is DPP supporters causing havoc.

We have become so lawless that you wonder if systems designed to maintain law and order are working. There is a certain club of people that believes it has special entitlements including harming others without fear of facing the long arm of the law.

But it all starts with our leaders; those we employed to make this country work. If they turn their eyes away when their cronies commit heinous crimes, they are accomplices to the evils.

In fact, before the recent attacks on opposition political party supporters, it had been all clear that unruly behaviour had found its way into Malawi as authorities cared less.

Vehicles with number plates branded ‘Ana a Dad’ or ‘APM 2019 Boma’ are all over town but our law enforcers cannot act. They have been squeezed into political corners where their professional abilities no longer matter. That is regrettable lawlessness.

Having a different number plate other than the one which the Department of Road Traffic and Safety Services gave you is purely criminal—there is no explanation on that unless it is a number plate used for special occasions.

Now, this criminal behaviour has established roots in Malawi because authorities are not condemning it. They are not empowering the police to pounce on law-breakers who can do anything in the name of belonging to a governing party.

Where in the world do civilians throw stones at a police station in the presence of police officers, challenging them that they will be properly dealt with, simply because the civilians want to release from custody a colleague suspected to have committed a crime?

In a normal country with uncompromised leadership, the police would immediately pounce on the civilians and lock them up.

Government has terribly disempowered law-enforcing agencies. They do not know whether what they are doing is right or wrong even when it is clear they are following the dictates of their profession.

A police officer who has mounted a roadblock to search cars will let a DPP vehicle pass without searching it. By simply stopping the car, he could be jeopardising his career. That is what Malawi has come to.

Now, because authorities have allowed lawlessness, associated with DPP, to flourish, their cronies are stopping at nothing to attack and harm whoever is seen to be their political opponent.

The trend is particularly dangerous this period when the pursuit of ruling this country is becoming hotter and hotter. We are remaining with less than four months to elect our leaders at the tripartite polls and it is imperative that law and order should be upheld beginning now.

In fact, there should never be a time when lawlessness should be massaged.

That is why it did not really offer much hope when President Peter Mutharika ‘finally’ condemned the recent attacks exacted by his ‘children’ on opposition political party supporters.

It appears it had to take the threats by women who gathered in Lilongwe to demand that Mutharika does so for the President to think of saying something.

He had to wait for a woman to be stripped naked in Mangochi for him to realise how lawless his ‘children’ have become.

Let us hope those arrested in relation to the attacks will face the full wrath of the law. There are DPP operatives who have terrorised others whose cases seem to have disappeared into thin air.

Malawians are watching to see if these ones will be sufficiently tried. In fact, there are others who have committed heinous crimes—simply because they support the governing party. Such criminals should be arrested too.

If these ones were arrested and tried immediately after committing the crimes, perhaps we would not be talking about others invading houses of opposition political party supporters to physically attack them, leaving them with permanent scars.

We would not be talking about a woman being stripped naked—ridiculing her womanhood—simply because she is donning UTM colours.

The lawlessness in Malawi, by DPP operatives, is the making of our leaders who have silently sanctioned it. Who knows, they could even be the ones perpetrating it.