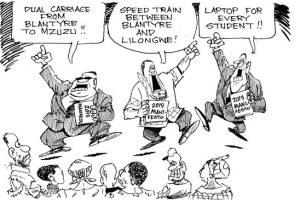 After MCP and UTM led with the unveiling of their manifestos a couple of weeks ago, it was the turn of the governing DPP and its partner UDF to launch theirs in Lilongwe just about four or five kilometres apart two weeks ago.

While DPP chose to launch their televised manifesto at Kamuzu Institute for Sports with pomp and colour, UDF did their function at Civo Stadium in Lilongwe.

Both parties made fresh promises to Malawians on the material day.

As UDF emphasised inclusive growth and good governance and stabilising the economy, develop a social protection system for vulnerable people, DPP, on the other hand, specified, among other things, what it would do in areas such as human rights, rule of law and fighting corruption.

On corruption, DPP promises that it will maintain zero tolerance on the cancer by dismissing and prosecuting all public servants that will deliberately delay providing public service to solicit bribes.

The party says it will also introduce compulsory anti-corruption subject in primary and secondary school and people will be required to pass anti-corruption examinations before securing a job in the public service. It says it will publicise all awardees of government contracts against their competitors and clearly indicate how they fared in the bidding process.

Malawians are worried about their poverty as well as the escalating high costs of living versus their earning power, so much so that when DPP says it has stabilised the economy, it does not wash with many of them because they do not see its benefits when essential commodities such as fuel keep on rising all the same depleting their pockets.

Any party manifesto that wants to be taken seriously should, therefore, have dealt with how to put money into people’s pockets in a straightforward manner and not what we have seen so far.

They are so many things any incoming government can tweak to put money into people’s pockets including tax reforms aimed at putting in place a fairer tax regime that balances things up for every taxpayer to enjoy life in pursuit of happiness.

The tweaking can include removal of countless levies on many things such as fuel and tobacco, which can also end up in putting money into people’s pockets instantly.

Then there are governance issues that also worry Malawians.

The 1994 Constitution is one fantastic piece of document containing the supreme law of the land.

Among other things, the Constitution contains the provision that paves the way for the establishment of constitutional bodies such as Malawi Human Rights Commission (MHRC), Law Commission and the Anti-Corruption Bureau (ACB) meant to protect the citizen’s well-being.

Unfortunately, these important constitutional bodies are at the mercy of the Executive and hardly do anything fundamental to execute their mandate to protect the rights of Malawians because the Executive arm of government deliberately stifles them by starving them financially.

On ACB, for example, the DPP manifesto has simply abandoned the promise made to Malawians that it would free up the bureau from Executive control by changing the law so that it protects the tenure of office for its director and deputy director.

MCP and UTM, on the other hand, are fumbling, yet they say they want to fight corruption so that they save money for development.

The promise that DPP has made on corruption is the most laughable, in my view.

Instead of accounting for its promise in 2014 to free up ACB from political interference, it has, this time, promised that it will maintain zero tolerance on corruption by dismissing and prosecuting all public servants that will deliberately delay providing public service to solicit bribes.

The party also says it will introduce some school subject on corruption and examinations on the same and only those that pass will get a job in the public service.

This is the most ridiculous point we have heard on how to curb corruption in our time.

It is clear that DPP knows that it needed to say something on corruption or risk a public backlash.

And so the drafters of its manifesto scratched their heads and came up with the nonsense on examinations and their passing just to be seen to be politically right.

The truth of the matter is that fight against corruption is the weakest link as far as the DPP’s attempt to be retained in government is concerned.

This has been compounded in the last five years by massive plunder of resources leading to the unresolved audit by the National Audit Office which established that K236 billion (12 files with ACB) went down the drain.

Instead of implementing the 2014 manifesto promise on how to curb corruption, President Peter Mutharika spent the better part of the last five years disputing this and claiming that his ministers are clean on corruption.

While he was doing this, there was massive plunder in Police and State agencies such as Escom.

The opposition parties cannot find a better soft underbelly against DPP and the President than the fight against corruption.

It was on total display even during the presidential debates in Lilongwe three weeks ago and there is nothing that the party can do about it.

But Malawians do not want complicated things in manifestoes to reflect their aspirations.

Malawians want a simple, better Malawi that moves with the world and is not the poorest country in the world.

Malawians want a Malawi where they are earning enough for themselves and their families, with the right systems in agriculture, health, education, social welfare and economy put in place.

They know their salvation is in systems and institutions which, at present, are not working well because the Executive is too powerful over them. Most of them merely serve narrow partisan interests that are not in line with those of citizens.

That is why DPP, for example, does not want a strong ACB, strong MHRC or Ombudsman because they know it will check their excesses without fear or favour.

Simply put, the will to do right is always sacrificed in this country by a desire to protect fellow politicians for survival.

Any manifesto that is really done to save Malawians, and not just serve as a conspiracy to seize power, should have addressed this.

Sadly, this has been scantily done across all manifestos.

In conclusion, party manifestos that we have seen over the past two months are full of lies and promise the moon when basic fundamental things have not been done.

They are hiding behind the mask of ambition, with the explanation that we need to be ambitious as a country to dream about dual carriage from Blantyre to Mzuzu, speed trains between Blantyre and Lilongwe and a laptop for every secondary school student.

This is despite that basic roads are full of potholes, there are not even normal trains properly connecting our cities and primary school learners are still learning under trees or, in other cases, substandard school blocks that fall on them

These manifestoes cannot save Malawians but are mere conspiracies to cheat Malawians into either retaining DPP in power or electing MCP or UTM.

We have been on that road before and we have not seen those fundamental gigantic projects we were once promised.