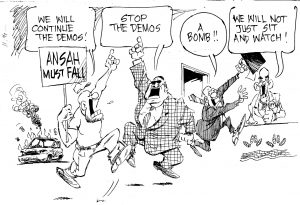 The political tension is still high in the country. As I write this, there were talks this week between the Human Rights Defenders Coalition (HRDC) and Attorney General Kalekeni Kaphale on how to handle demonstrations.

The meetings were ordered by the Supreme Court and were meant to achieve a balance between the constitutional rights of HRDC, who want to protest, against those whose economic rights are affected as result of violent protests that lead to loss of property.

The meetings were not without drama. The first meeting, at Crossroads Hotel was abandoned as a result of HRDC Vice-Chairperson Gift Trapence’s car being nearly petrol-bombed by persons the police cannot arrest until today.

That was not all. The meeting had to change venues many times because HRDC leaders were suspicious about venues that had something to do with government as they thought it could compromise their security.

The bomb scare seemed to vindicate them.

The later meeting between the two sides on Wednesday experienced similar drama with the venue changing from Kamuzu Barracks, where it was supposed to be held under the watchful muzzle of guns, to the fortified compound of United Nations Development Programme offices in Lilongwe, all in the name of securing members of HRDC from possible harm.

All this is happening because the Democratic Progressive Party (DPP) establishment is out to stop the right of Malawians to demonstrate under the pretext of balancing it with the economic rights of those who do not take part in demos but, at the same time, become victims of violence and lose property.

That is why you have statements from Minister of Information Mark Botomani every time he hears that HRDC is out to lead protesters on the streets, threatening Malawians from taking part in the demonstrations and that they would be stopped by necessary force, arguing the protests have not been peaceful.

Of course, others such as DPP governor for the Southern Region Charles Mchacha would also put in word to a good measure, warning HRDC alongside political parties such as Malawi Congress Party (MCP) and UTM against creating anarchy to fulfil the alleged regime change quest under the disguise of the anti-Jane Ansah protests.

All this is high voltage stuff that is responsible for causing tension in Malawi that is affecting each and every one of us.

We are living in a country that is not safe where economic activity has slowed down and everyone is angry against the other.

It is very clear that the whole DPP establishment is wary of the demos and working overtime to find a way of stopping them and, in the process, making many mistakes and trampling on freedoms here and there.

This may be understandable as the whole establishment knows that a lot is at stake with the court case in Lilongwe in which UTM president Saulos Chilima and his MCP counterpart Lazarus Chakwera are calling on the court to declare the May 21 election in which Malawi Electoral Commission declared President Peter Mutharika as winner to be nullified.

Then there are the demos themselves with the daring HRDC even thinking of the impossible such as closing airports and borders accompanied by subdued business activity in the country, affecting the same economy that government touts as its main success.

All this has had a big impact on government that, as we speak, nothing much is happening as everything is in the pending tray and so the wariness is understandable—nothing is moving in the country.

The only drawback is that some of the actions they are taking will just worsen an already volatile situation and make matters worse to encourage more people to pour on the streets when all avenues at the disposal of the DPP establishment have been exhausted.

I shudder to imagine what the next round of HRDC organised protests will bring and what that will do to the country especially when government keeps on boasting that necessary force will be used to stop the demos in view of the order to Malawi Defence Force (MDF) and Malawi Police Service Mutharika made in Mangochi recently.

It is clear that the situation in the country is getting worse by each day and the critical players are going in circles with nothing getting sorted and each side digging deep in their position as if it is helping them. They need to slow down. Speed kills.

What would press conferences such as the ones organised by Mchacha or HRDC achieve apart from making the already volatile situation more volatile instead of cooling if the idea is to dowse the situation?

Public ranting and issuing press statements have not helped and neither do they encourage dialogue or offer any concessions apart from boasting about this and that manifested by statements such as “We will not stand aside or we will also organise parallel protests”.

What would more DPP victory parades or, indeed, organisation of parallel demonstrations do apart from inflaming an already volatile situation, forcing things to get out hand, leading to more petrol-bombing of each others’ cars as was about to happen at Crossroads Hotel when some thugs targeted Trapence’s car?

The police are at their lowest ebb and not helping matters as evidenced by the fact that now the public trusts MDF more than the service that is supposed to take care of our internal security.

The police have simply been a joke.

It is time for Mutharika to choose whether he wants peace for this nation or not and he must act accordingly in the name of healing the nation which it badly needs at this time.

The President and his henchmen are clearly under pressure and tired with the current state of the country and if given choice, they could have stopped it a long time ago.

Their actions, whether through legal means or executive orders, clearly show they are reaching desperation levels.

But they must do more in the name of nation building and unity that we all badly need in this country.

What is happening is destroying the nation in broad daylight.

In the final analysis, the country is at a very wrong and dangerous juncture.

It is time for those that are jostling to slow down and begin to listen to each other.

The tension must end. We all have something to lose.