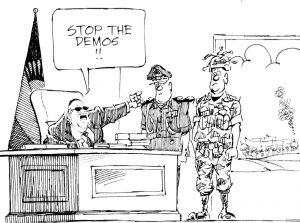 Without the Supreme Court on Tuesday evening stopping Human Rights Defenders Coalition (HRDC) from organising demos until a discussion is held on how to avoid resultant violence and destruction, this week would have seen another round of carnage in our major cities.

Just to fill you in, HRDC had announced at a press conference that they would conduct the next demos from Wednesday, August 26, to August 30 and that, this time, it will be closure of the country’s two main airports and all borders meant to force the resignation of Jane Ansah as Chairperson of Malawi Electoral Commission (Mec).

As the days drew closer, the nation was analysing the farreaching repercussions of such actions and, no wonder, the affected agencies were up in arms.

Malawi Revenue Authority applied to the High Court to stop protesters from coming close to their property, arguing that they keep property of the public in undeclared duty goods, a matter that was joined by Airport Development Limited and National Oil Company of Malawi.

The High Court gave them this relief.

On the mediation front, former president Bakili Muluzi wrote HRDC Chairperson Timothy Mtambo calling for a meeting in view of the intention to demonstrate at airports, a proposal that was rejected by the grouping, insisting that they were not interested in manipulative dialogue which is taking interested parties nowhere.

Then, in a clear sign that what HRDC was suggesting to close airports and borders has rattled the system, President Peter Mutharika, as Commander-in-Chief of Malawi Defence Force and Malawi Police Service, ordered the two security organs to stop the airport and border protests using necessary force.

A highly charged Mutharika accused HRDC, opposition Malawi Congress Party (MCP) and UTM of organising demos to topple his government unlawfully, arguing that, without borders, there is no Malawi and that undermining borders is undermining the very existence and sovereignty of Malawi.

In response, HRDC and other legal experts cautioned the President saying demonstrations are a constitutional right and that stopping them would amount to contempt of court after aHigh Court judge had given organisers a go-ahead, and that he has no powers to override the Constitution.

Then you had arson and use of petrol bombs continuing with Mtambo and MCP campaign director Moses Kunkuyu being victims this time.

When you see what is happening in Malawi, you just know that there is bottled-up anger in this country among the majority of citizens.

It is this anger that has forced HRDC to imagine the unthinkable – sealing off this country from the outside for three days.

The effects of such action are horrendous in that business transactions at borders and airports and critical supplies that enter through borders such as fuel were at utter risk.

Mutharika’s response to it all in Mangochi made matters worse.

Clearly, he and his government were aware of the far-reaching consequences of what HRDC was intending to do and it was not surprising that the President spoke tough because the moment you close borders, you are announcing to the world that you are about to be a failed State.

It can lead to loss of life and property as we saw in the past, specifically on July 20 2011, when 20 young people lost their lives as a result of confrontational demos.

Simply put, the President got right the meaning of airport and border closure but got wrong what needed to be done to stop it.

As President, it is his duty to find out what is causing people to do the unthinkable and unimaginable and not just reduce everything down to threats and heap the blame on those he thinks lost the election and are jealous of him.

The President cannot deliberately ignore the grudge of 62 percent of Malawians who did not vote for him and are angry and demanding that Ansah goes because they think she cannot run another election in the country.

MCP and UTM are there to make sure of that.

The President should know that Malawians he is threatening with decimation with necessary force on the streets are as just as Malawian as those that support him.

The difference is that the protesters have a grudge and he must listen to them and not order soldiers and the Police to use the force of the State to stop them from being on the streets.

The bottom line is that what has been happening in this country is a result of bottled-up anger by a big section of the country that feels because they do not belong to a certain tribe, region or party, they are less Malawian and cannot enjoy anything that this country can offer.

Founding president the late Dr Hastings Kamuzu Banda was not foolish when he preached continuously for over 30 years that there is no Lhomwe, Chewa, Tumbuka, Ngoni or Yao but we are all Malawians in this country.

Muluzi more or less tried to bury tribal differences and largely appointed people to balance the country up without putting his own Yao tribe at the pedestal.

Unfortunately, the perception among the majority in this country is that the two Mutharikas we have had for the past 15 years have promoted their tribe and those that support it at the expense of others.

This has led to anger among members of the other tribes bottling up for the past 15 years.

The rest cannot imagine another five years with the same perception after the maintenance of power by the same group they think does not want to share the national cake equitably.

The result is the court case challenge, demonstrations and arson everywhere and every day.

The country is at a very wrong and dangerous juncture, almost on the brink of civil strife.

The President must know this and if he wants to be remembered as statesman, he must reach out to his political foes and not continue to feel insulated from all these problems.

The attempts at mediation being championed by Muluzi and Public Affairs Committee are just a travesty and will be fruitless.

The bottled-up anger among the majority of Malawians must be dealt with as a matter of urgency. The opposite is just too unbearable for this country.