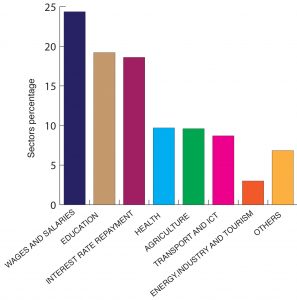 Minister of Finance, Joseph Mwanamvekha, Friday presented a K2.023 trillion budget for the 2020/21 fiscal year which mirrored the administration’s last gasp attempt to cling to power with the June 2020 slated fresh presidential elections just 10 days away.

But Leader of Opposition, Lobin Lowe, has trashed the financial plan, describing it as a campaign tool aimed at hoodwinking Malawians into voting the Democratic Progressive Party (DPP) into government again.

Lowe has since promised that the budget will be tabled again to address real issues and offer real hope to Malawians when the Tonse Alliance wins the fresh presidential elections.

While being tough with the private sector by not giving them the much needed bailout to keep them going and preserve jobs, Mwanamvekha in his budget has promised “Christmas” to traditional leaders, churches and football and netball teams as well as peasant farmers despite the economy facing the harsh reality of slipping into a recession if Covid-19 continues up to December 2020.

Among others, Mwanamvekha has given paramount chiefs a provision to import a duty free vehicle once in every five years, despite their honoraria remaining miserable.

Despite the limited fiscal space, the Minister also announced that traditional leaders from sub-traditional authority level will be put on medical health scheme and that fertiliser under the Farm Input Subsidy Programme would go down to K5, 000 per 50 kilogramme bag in what could be seen as a direct response to the Tonse Alliance campaign trump card of bringing the bag of fertiliser to K4, 495.

The budget has seen wages and salaries getting the lion’s share of the financial appropriation plan at K493.1 billion, representing 24.36 percent of the total budget.

Ironically the health sector which is critical in the fight against Covid-19 has received K195.3 billion, representing 9.7 percent of the total budget.

Similarly, agriculture which is the backbone of Malawi’s economy has been given K194.9 billion, representing 9.6 percent of the total budget which is almost half of the allocation for interest rate repayment.

“First, a scenario which assumes that business will normalise by September, 2020 with GDP growth estimated at 1.9 percent. Second, a worst case scenario, where business and economic activities may not return to normality until December, 2020, resulting into a GDP growth rate of -3.8 percent,” he said.

The local Chancellor of the Exchequer said revenues and grants for the 2020/2021 fiscal year are estimated at K1.372 trillion, representing 19.2 percent of GDP and which is 10.1 percent down when compared to the 2019/2020 mid-year revised estimate.

He noted that grants are estimated at K156.9 billion, representing 2.2 percent of GDP comprising K26.5 billion from foreign governments and K130.5 billion from international organisations in form of dedicated and project grants.

Mwanamvekha further observed that out of the K2.023 trillion total expenditure, recurrent expenses are estimated at K1.506 trillion while development expenditure is programed at K517.7 billion.

The budget has seen the overall fiscal deficit growing to K651.5 billion, which is 9.1 percent of GDP up from around three percent in the 2019/2020 budget.

“This deficit will be financed by foreign borrowing amounting to K161.5 billion and domestic borrowing amounting to K490.0 billion. It is important to note that if this deficit has to be reduced, further cuts in the budget would be required. However, such cuts are constrained by the mandatory nature of most budget lines such as; wages and salaries, public debt service, pensions and gratuities, grants to subverted organisations, court claims and compensations.

“In total, Madam Speaker, these mandatory expenditures are estimated at K1.110 trillion, representing 91.4 percent of domestic revenues and 54.9 percent of total government expenditure. I, however, wish to invite the honourable members that over and above the rising mandatory expenditures, Government will face further challenges in its revenue mobilisation efforts due to the Covid-19 pandemic and the political impasse which will make it much more difficult to finance the budget during the 2020/2021 fiscal year. Therefore, budget funding will be dependent upon availability of resources. Should it become necessary, cuts to the recurrent and development budget lines will be inevitable,” he said.

Among the winners in the budget are salary earners who have seen the income tax free threshold under the Personal Income Tax regime being increased from K45, 000 per month to K50, 000 per month.

Mwanamvekha said the government is aware that the adjustment may be deemed small but was quick to note that in the financial plan, there is inadequate fiscal space to allow for bigger adjustments.

Other winners are health care workers who have seen government exempting tax from their risk allowance.

“Madam Speaker, Honourable Members will agree that the clergy plays a very important role in our society. Madam Speaker, in order to recognise this role and improve their welfare, government will now exempt Personal Income Tax from salaries paid to the clergy under the First Schedule of the Taxation Act,” he said.

Also wearing a smile are broadcasters who will now be able to enjoy duty free importation of television and radio communication equipment.

With the fresh presidential elections just around the corner, it remains to be seen as to whether the budget will be passed as presented or will be re-tabled.

Ballot papers in next Friday

The power of choice