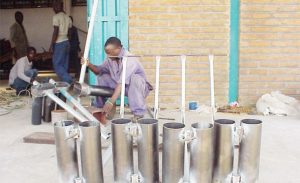 Masitala, a 25-year-old welder, is one the first cohort of graduates from community technical colleges.

He said in an interview he was inspired by President Peter Mutharika to enroll for the course.

When he launched the community technical college concept at Naminjiwa Community Technical College (CTC) in Phalombe in 2015, Mutharika said the colleges are meant to endow young people in the country with different skills for them to create their own employment and reduce the high levels of unemployment in the country.

Self-employment, indeed, Masitala created. His business had been booming impressively.

But Masitala fears he may not realise his Mutharika inspired dream.

He says the persistent power outages and the decision by Escom to raise electricity tariffs has made it expensive to the small and medium entrepreneurs such as him are threatening the future of the welding industry in Malawi.

Today, Masitala spends six to seven hours of what should have been his most productive hours playing bawo outside his welding shop.

“I, too, have been hit hard by the power outages just like many other local and foreign investors, manufacturers and town and city residents who depend on electricity to power their businesses. When there is a blackout, I close shop to join my friends to play bawo in anticipation that power would return soon, but usually this is to no avail,” says Masitala as he turns his eyes to the wooden bawo board to take his turn to move the marbles.

There can hardly be any meaningful economic development in a country where its electricity system is not reliable.

In Malawi, though, severe power shortages and rolling blackouts have become a daily occurrence around the country as the antiquated power grid is continuously stretched beyond its means.

Unreliable power supply characterised by long and persistent load-shedding negatively affects the productivity, competitiveness and resilience of the Malawi’s trade, industry and private sector, the country’s engine for economic growth.

Inversely, electricity demand has been growing steadily at six to eight percent per annum and, as a result, the existing system is greatly strained and the frequency of blackouts is increasing, constraining industrial production and provision of socio-economic services as well as deterring foreign investment.

But just as Malawians, both in rural and urban areas, industries and manufacturers were beginning to come to terms with the sickening blackouts and the resultant loss to their various businesses, government took a bold decision to buy 78 diesel-powered generators to add electricity power to the national grid.

The Managing Director of Power Solution Africa, a subsidiary of Aggreko from which government procured the generators, James Shepherd said the decision by the Mutharika administration to procure diesel-powered generators wiould ensure that both urban and rural areas have access to electricity consistently.

Shepherd assured Malawians that the generators “are very effective and Malawians will never regret the government’s decision”.

“We have been in business since 1962; listed on the London Stock Exchange with our headquarters in Scotland; our core function is to design and manufacture equipment specifically for the stand-by diesel generator requirements and work with leading innovators to ensure our equipment offers maximum fuel flexibility by using gas, diesel and renewable fuel resources,” he said.

He added: “Our business helps to transform the livelihoods of individuals, organisations and general communities globally and that’s what has made us the world’s leading provider of modular, mobile power and heating equipment, operating from more than 200 locations worldwide. So Malawi made the wisest decision.”

He said his company recognises the fact that hydro-power has been a challenge in many countries due to erratic rains and it is for this reason that Aggreko manufactures energy equipment to ensure that people have electricity and spur a country’s economy in the process.

Former minister of Natural Resources, Energy and Environment Grain Malunga once observed that if Malawi is to achieve meaningful economic development, rural transformation, production enhancement and poverty reduction, there is urgent need for government to increase access to electricity by the rural populace.

Malunga said all the developed countries have reached where they are today because they, first of all, developed their energy sector.

“For Malawi and other countries in the region, the full potential of the energy sector has remained far from being realised,” he said.

Mutharika agrees with Malunga. Hence, when he commissioned the generators in Blantyre in February 2018, he assured the nation that with the generators installed, the story of blackouts would be water under the bridge come May 2018.

But virtually a month to go before the hopeless and anxious Malawians can make a crossover to the “power all day every day” nation as the President promised, are there signs of hope for a light at the end of the tunnel?

Probably not as our spot checks in Areas 21, 22, 23, 24 and 25 in Lilongwe, Balaka, Ntcheu, Dedza, Machinga and Jenda Rural Growth Centre in Mzimba show that those connected to the national electricity grid are still living in darkness although they are paying higher-than-their-monthly-income in tariffs for merely connecting to lifeless Escom poles and wires.

Josephine Phiri, a Chilinde resident in Lilongwe, says power usually goes off at 4am and returns at 8pm.

She says this forces her to doubt the sincerity and honesty of the government officials on the effectiveness of the generators.

“I depend on cooking and selling twobwa (gruel) for survival. The persistent power outages, therefore, negatively affects my business and my livelihood,” says Phiri, adding that she does not hope for an improved power supply by May 2018 as the President espouses.

“I don’t think these generators will help matters at all. These are a joke to the nation. Our leaders must stop playing rhetoric and churning out lies to impress us that things will soon improve when their approach to the national problems remains chaotic as it is now,” she cautions.