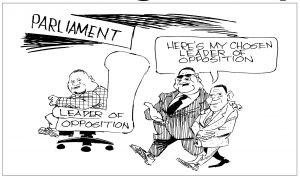 Finally, the countdown to the first 100 days for the Tonse Alliance led administration, with President Lazarus Chakwera at the helm has almost run its course, and we are told that the powers-that-be will soon be addressing us to take stock of what they have achieved.

Just like Democratic Progressive Party (DPP) spokesperson on finance Joseph Mwanamvekha pointed out the other day in Parliament, it is one thing to have a colourful dream and another to translate the same into reality. We know that there is a whole four years within which the Tonse administration will implement tangible projects but we certainly need to start seeing some movements now to cut out any skepticism.

It was not easy freeing Malawi from the jaws and clutches of some greedy individuals and politicians, who regarded this country as their personal estate and thought they could toy with it at free will until Malawians unanimously decided that it was time to give DPP the boot and bestow the leadership mantle upon President Chakwera and Vice President Saulos Chilima. Even one Justice Jane Ansah, who struck poses with DPP cadets at Kamuzu Stadium and strutted ‘catwalk’ at Parliament when summoned after she ‘patted herself on the back’ for running a sham of an election, could only stand in awe as the rejuvenated Malawi Electoral Commission (Mec), with Justice Chifundo Kachale at the helm, did things right by stepping on the gas pedal and granting Malawians an enviable presidential election at lightning speed. Now that we have that out of the way, it is time for the Tonse Alliance administration to put in the work and this 100 day test is only the beginning.

There is no denying the fact that the current administration promised people universal subsidy; only to now shift gears and instead present Affordable Inputs Programme. Similarly bed fellows the Tonse Alliance did tell all and sundry that those aged 65 and above would soon heave a sigh of relief as they would be accessing a K15,000 monthly stipend with which to sustain themselves, but sadly, there was no allocation or mention of such in the 2020/2021 financial blueprint for the country.

These are the little loose ends that might eventually end up spoiling the broth if not taken care of well ahead of time. We needed to see, sooner than later, that the new government means business by rolling out signature projects. I know that everything cannot be done within a blink of an eye but that does not justify sleepwalking either. Sorting out the systems should go hand in hand with doing the dirty work on the ground so that people should start noticing the industry and the economy as a whole getting back on its feet, potable water being easily accessible for all, a portion of the promised one million jobs being implemented at the onset etcetera. When critics tell you to balance up, take heed of such advise instead of going ballistic.

Yes, everyone is excited because like it or not, we made away with impudence and the writing is clear on the wall that Malawians are very happy that DPP is history and the new dawn we were waiting for is here, but now that is not going to be the magic wand to turn around the fortunes. There has to be one or two landmark initiatives for the Tonse Alliance-led administration that is going to tell Malawians that ‘yes, we are here’.

Just when you would think that everything is plain sailing for DPP after their financial spokesperson tore into the 2020/2021 National Budget presented by the Tonse Alliance administration the other day, boom! In comes the party’s leader and the country’s former president Peter Mutharika with his letter, addressed to the Speaker of Parliament, Catherine Gotani Hara, announcing ‘change’ in Leader of Opposition occupant, seemingly clipping the wings of one Kondwani Nankhumwa of Mulanje Central Constituency. After what seemed like a spirited battle that potentially has pitied two bulls in the battle for the party’s leadership, Mutharika, who is seeing his last tenure as DPP leader, decided to try and bring semblance and order in the party by introducing one Francis Kasaila who is legislator for Nsanje Central Constituency as new Leader of Opposition. Sadly, his attempts hit a brick wall as legislators argued that Leader of Opposition is elected by members of Parliament and not some party official who is not even a legislator.

Over the past two to three weeks, ongoing leadership wrangles in the DPP have threatened to derail what is left of the former governing party. Now, this latest stunt pulled by the party’s president might have just shaken further the stability of the DPP as things might just go South; since Nankhumwa had allegedly already hinted that should he be removed as Leader of Opposition, the party risks a revolt on its hands. While this drama is unfolding in Parliament, the former governing party needs to start scouting for a Regional Governor for the Northern Region as the incumbent, Christopher Mzomera Ngwira, is currently in police custody, awaiting sentencing for crimes to do with abuse of public funds.

The time to act is now; do not get cocky.

Work cut out for boards