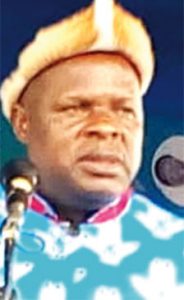 Democratic Progressive Party (DPP) has said its focus in the coming years, if it retains power, will be on sustainable development.

In its 119-page development blueprint, titled ‘2019-2024 Manifesto: Sustaining a People-centred Government’ which was launched in Lilongwe yesterday, the party claims the country has gone beyond stabilisation of the economy.

It also says the DPP government will set up agricultural commodity markets that will be fully equipped with refrigeration equipment in areas the commodities are being produced.

The areas the manifesto cites include Jenda, Lizulu, Tsangano, Bvumbwe, Khwisa and Salima. It says there will be other areas that will benefit from the initiative.

Other issues in the manifesto are energy, education and human development, transport and infrastructure, universal health coverage and women empowerment.

The manifesto specifies what the party will do on such areas as human rights and the rule law, fighting corruption, fraud and other economic crimes, information, communication and technology, tourism, the youth, public sector reforms, water and irrigation development and separation of powers.

In every section, the manifesto starts by highlighting what has been achieved since 2014 and what the party intends to do in coming years.

On separation of powers, the DPP says it upholds the principle that the Executive, Judiciary and Legislature are independent.

“The president, as stipulated in the constitution of the Republic of Malawi, shall hold office for one more term of five years, following his re-election in May 2019. Under no circumstances shall the president serve a third term of office,” reads the manifesto.

On the fight against corruption, fraud and other economic crimes, the DPP says it will maintain its zero tolerance to corruption.

“Our government will dismiss and prosecute all public servants that will deliberately delay providing public service to solicit bribes,” reads the manifesto.

It also says DPP will introduce a compulsory anti-corruption subject in primary and secondary schools to nurture a corrupt-free generation.

The manifesto also says people will be required to pass anti-corruption examinations before securing a job in the public service and publicise all awardees of government contracts against their competitors and clearly indicate how they fared in the bidding process.

In the manifesto, the DPP also says it will ensure that there are stiffer and custodial sentences of a minimum of 15 years for convicts of corruption and economic crimes.

President Peter Mutharika said there will be other campaign launches in the country’s political regions.

“We are now ready. The battle has started. This year’s campaign is more important than those of the past years. We are going to choose whether we want development or politics. To choose between those promising and those already doing it,” he said.

He said other political parties have nothing new to offer to Malawians.

“What they are saying, I am already doing. There is nothing new they are promising. They just want to enter into government. We have a lot of things in this manifesto. We want to improve the country,” Mutharika said.

“I am happy that people have supported me. I have been holding a number of rallies. Malawians support you, Your Excellency. You are definitely winning the elections,” Chimulirenji said.

Chairperson of the orgainsing committee of the function, Brown Mpinganjira, said the DPP would have an easy campaign.