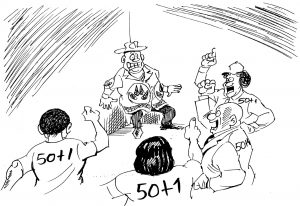 The take-home message from the story in which hundreds upon hundreds of the Democratic Progressive Party (DPP) members this week took to the streets in Blantyre and Zomba to protest against the Constitutional Court judgment which nullified the May 21, 2019 presidential election results and ordered a fresh presidential poll, is that DPP is ultimately cornered and it is a checkmate.

It is not an everyday occurrence that the leadership of a party that calls itself ruling can mobilise its membership to protest against a ruling of a court especially at this time when Parliament is considering the consequential orders in the verdict such as the make-up of the Electoral Commission and the 50 percent plus 1 definition of majority for presidential election winner.

But there it was this week that DPP supporters in Zomba and Blantyre took part in the protests that they termed Restoration of Justice March.

Simply put, the DPP is cornered and it is has seen its world thrown upside down as a result of the Constitutional Court ruling in Lilongwe on that day of February 3.

The party is in a fight of its life. By redefining the word majority in determining the winner of a presidential election in the Constitution to mean it is 50 percent plus 1 percent of the total valid vote, the five judges—Healey Potani, Dingiswayo Madise, Mike Tembo, Redson Kapindu and Ivy Kamanga—struck at the core and heart of the very reason DPP has always been in power.

The DPP has taken advantage of the fragmented opposition and keep its support predominantly in the Southern Region to win elections using simple majority.

The rest of the country has cringed and cried foul that we have a minority president at State House sent there by the DPP but the party has not cared a hoot.

Instead, the party gladly perched at the top and practised tribalism and regionalism knowing that they are enough to keep it in power.

But the ruling has blasted that false bubble and all of a sudden, the DPP establishment has seen its comfort zone wiped out in a blink of a second and now it is clutching at the straws.

The opposition-controlled Parliament has not wasted time to comply with the ruling by preparing three private members bills through its Legal Affairs Committee that sacrificed a whole weekend in Salima working with consultants to thrash out the proposed laws.

Motions tabled to allow the House to debate the bills were pushed through much to the opposition and chagrin of the DPP which vehemently and emotionally opposed them.

DPP MPs in the House ran their voices hoarse in castigating the Constitutional Court and for the first time spoke of the three arms of government—Executive, Judiciary and Parliament— being independent of each other.

But in the end, the MPs lost it and the train left them in their tracks.

The MP more or less replicated the so-called democratic march in Blantyre and Zomba that we saw this week and it was pathetic.

I repeat, DPP is fighting for its political life and it will get ugly.

Chinua Achebe wrote that when you see a toad jumping to safety in broad daylight, it is most probable that a deadly snake is after its life.

This is the reason the unthinkable happened— members of a party of a sitting president demonstrating against the same system he is its topmost boss.

It sounds funny but it is not.

Some must construe the march as a form of intimidation of the judges and a threat to independence of the Judiciary.

But the reality is the February 3 verdict which the five judges delivered is almost a seminal one; nullifying an election which is unheard of in most jurisdictions in the world.

It has earned the five judges not just local plaudits but even on the international scene.

During the demos, some placards carried by the protesters were alleging serious ethical issues about the judges.

This was outright defamatory and knowing the sensitivity of the case, the DPP could have raised them a long time ago.

It is once against a sign of panic in the ranks and file of an outfit that calls itself a ruling party.

It is a case of DPP surviving the initial shock of being told the President was not duly elected and now transitioning into the survival mode.

That is why there is great symbolism in the fact that the protests began in Blantyre and then moving on to Zomba and then Lilongwe and Mzuzu.

It is the DPP revitalising its base and put it in a fighting mood politically for the upcoming battle of an election that the party never wanted in the first place.

Yet the signs of panic and lack of strategy are there and I question the wisdom of the protests, calling the five judges names when the matter has been appealed in the Supreme Court.

The DPP is not being strategic by antagonising the same Judiciary it seeks remedy from through the unpalatable comments about the five judges.