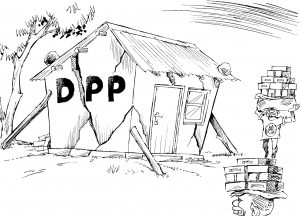 Former governing Democratic Progressive Party (DPP) is seemingly having tough time in opposition where it was thrust to after losing the June 23 fresh presidential election which was conducted after the courts had nullified the May 21, 2019 presidential poll.

It is always difficult to easily move on after losing the presidency, especially when you all along thought the cards were stuck in your favour. Too often, governing parties strive to stick to power using any necessary means because they are afraid of facing the wrath of the law once that grip of power that prevented investigating and prosecuting agencies from going after them falters.

DPP is terribly bruised; there is no doubt about that. Its wounds are further festering with the numerous arrests of officials who worked in the public service during its time and purported imminent arrests of some of the party’s officials.

But in any case, this was a critical moment for the party to be united. DPP has a history of regrouping and bouncing back when some people least expected it. After the death of its founding leader Bingu wa Mutharika in 2012 and subsequent loss of the presidency to People’s Party’s Joyce Banda, some of us thought the party would not reclaim the presidency.

It did and that experience has become part of our history. That is why even now, after losing the presidency at the June 23 poll, the thinking among many people has been that the party should not lose focus but concentrate on rebuilding its image and structures.

Of course, revelations of massive plunder of public resources during the immediate-past administration have struck a huge blow in the party’s psyche. It will really take some time for Malawians to forget that during the administration, public resources were being siphoned with careless abandon; with systems apparently manipulated to aid such acts.

It was free-for-all. Everyone who had a feeling and opportunity of dipping their fingers in the public coffers gladly did so without an ounce of remorse. The result was a terribly disfigured public service delivery system characterised by shortage of drugs in hospitals and poor infrastructure development, among others.

But still, there is an opportunity to mend that battered image. The change of leadership would be the first important step in that process. It is clear that the mess associated with the DPP of Peter Mutharika does not preclude other senior members of the party, but still they must be working to mobilise their supporters and assure them that the party’s traction across the country remains intact.

But that is not happening. Instead, cracks have emerged in the party with senior officials either resigning or being fired. What is coming out clear about the party is that it is lacking leadership and may continue to do so for days to come.

Mutharika will not be DPP’s president forever. He will not stand during the 2025 presidential election; at least, that is what we are getting according to the party’s systems and laws. But he still has the mandate to keep leading the party until it goes to the next convention where fresh leaders will have to be elected.

But there are some officials and members within the party that believe the former president has to relinquish the position as soon as possible so that a new leader comes in to steer the rebuilding process.

Among the top officials, it is Secretary General (SG) Grezelder Jeffrey who recently came public to declare that Mutharika has done his part and that the party should call for an early convention so that it can elect new leaders.

Now, for a whole SG—the Chief Executive Officer of a party—to come out in the open and state her views the way Jeffrey did is not easy. It speaks volumes of stronger undercurrents that, perhaps, are being fanned by more officials in the party.

That is why dismissing her suggestions offhandedly is not good for the party at all. She might have her own frustrations but DPP officials, led by Mutharika himself, were supposed to understand her better. What has happened now is exposing deepening cracks in an opposition party that should be striving to grow stronger every day.

Cracks have always been there in DPP, as have been in other political parties. The former governing party has in the past managed to successfully placate dissidents and out there the image has been of an entity so much as peace.

Jeffrey’s case needs to be critically looked into just like Ben Phiri’s. They are not small matters which can be dismissed without a second thought because these party officials obviously have their lieutenants who share their views and might be willing to follow them, thereby further dividing the party.

For Phiri, while he seems to project that his resignation is due to the fact that he failed to lead the party to victory during the court-sanctioned presidential election, we all know there are bigger issues that forced his hand.

In fact, in his resignation letter, he indicated that accusations were being placed on him and others who apparently failed to protect DPP’s Central Region vote— whatever that means. If true, such accusations should be avoided at all cost if the party is serious about rebuilding itself.

DPP cannot afford to entertain the cracks that are emerging now. The party needs to be united not only for its future but also because it has to form a strong opposition force that should constantly provide checks and balances to government.

Of course with corruption charges hovering on the heads of some of its leaders, there is the temptation by those leaders to create confusion, come in conflict with the party, get fired or resign, and eventually join the government side. It is a political trick that has been employed before.

The idea usually has been that if one joins a governing party, they will be left scot free even if they committed various crimes. The Tonse Alliance administration must be aware of this. Not everyone joining the party is really enthralled by its agenda.