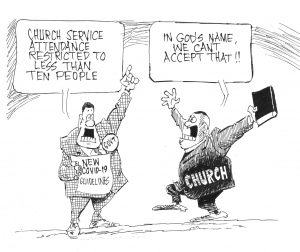 The recently announced Covid-19 gazetted regulations, including punitive measures, have divided opinion among the general public such that even some churches are showing signs of resistance to some of the mandatory regulations that have been set.

The other day, it was the General Assembly of the Church of Central African Presbyterian (C.C.A.P), in its consensus making it crystal clear that none of its church affiliates will adhere to one of the new rules, which demands that churches restrict service attendance to less than 10 people. The C.C.A.P has opted to go by the previous declaration that churches should allow service attendance of less than 100 people. I will not be surprised to see other conventional churches subscribing to the same.

Equally, pastors under some pentecostal grouping have shared the stance, citing scriptures that back group gatherings by Christians at church in order to overcome evil. In their view, a pandemic such as the Covid-19 pandemic is no ordinary occurrence and as such, demands even the higher power from above in order to be defeated.

Well if you ask me, it certainly does not make sense to leave bars open to the public during a prescribed time and yet, in the same breath we are denying Malawians who have religious beliefs the same chance to congregate for worship. After all, it is highly likely that the churches would do a better job of sticking to some of the guidelines such as sanitising of hands, wearing of masks and time deadlines than bars, whose patronage is more than likely to violate given stipulations once intoxicated.

On the other hand, others have come out to condemn the position taken by these churches, arguing that the church would be toying with people’s lives if it is to leave open service attendance since it is highly believed that the Covid-19 spreads fast in crowded gatherings. Their theory is that the church would find it hard to turn away any of its members or indeed anyone in the community who wants to congregate and as such it is better off going by the less than 10 people stipulation by Capital Hill.

The other argument advanced is that the church is only concerned because it would be deprived of financial support in the form of offerings and tithes. Well, there could be some grain of truth in that because lately it appears not all churches are in the business of winning souls for Christ, others are in it for the business of ‘making money’, which is a mockery to Christianity (If indeed such institutions exist in the country).

But at the end of the day, it is not about what the government has set or not, to contain the deadly Covid-19 pandemic. Every person is responsible for their own life and that of their loved ones so it is entirely up to you to choose life or death. I do not think the whole government apparatus can have sinister motives by coming up with the new Covid-19 preventive measures.

Perhaps the only worry should be how the enforcement organs would go about ensuring that there is compliance among the population.

I have in mind our good police officers who would not waste any time to tilt the set penalties to work in their favours. Why, you may ask? Well, just look at what happens on the roads. When sometimes caught for traffic violation by our good officers, I am sure most would agree how we have managed to manouvre our way through by patting with just a fraction of a stipulated payment. I see the same happening where people are caught for not wearing face masks in public. And then, it has also been argued that some people, especially in remote areas, are poverty-stricken such that they cannot spare even K500 to buy a mask, least they go to bed on an empty stomach. Hopefully, the government will take into consideration the loud calls to make available face masks to such people,otherwise it would render the preventive measures set futile.

The most interesting scenario will likely occur at funeral ceremonies, where we are told gatherings have to be restricted to no more than 50. It can be done if there could be unity of purpose but like one traditional leader said on one of the radio stations the other day, it might be a tall order for them and other influential citizens to turn back people, especially where they have already mobilised themselves and gathered at a funeral ceremony.

I have always believed that shoving stuff down people’s throats, especially in a democratic set-up like ours, is a complete waste of time and as such, political masters ought to realise before making overbearing decisions that in other words, they are purchasing a one way ticket to nowhere.

Such approaches have even failed to bring about the desired results in developed economies, most of which are even now reverting back to normality.

My final conclusion on this matter is that the government should have taken a cautious approach by introducing piecemeal regulations and intensifying public awareness on the same Covid-19 issue, before overwhelming people, as has been the case now.

Otherwise the intentions are good, and nothing wrong with Capital Hill trying to look out for the citizenry but the execution has certainly left a lot to be desired. Easy does it.