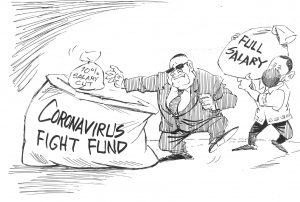 Something we hoped should not happen has just happened.

Not only did we not want any case of Covid-19 on home soil but we also did not want to hear that any Malawian would lose their life due to the virus that originated in China and has caused havoc everywhere in the world, Europe being the hardest hit.

We have now a number of confirmed cases and we have started counting the number of deaths.

It is finally here but we need to keep cool heads if, at all, we will survive.

President Peter Mutharika and his Cabinet Committee on Covid-19 have been busy issuing new guidelines in the wake of increasing threat of the Covid-19, aimed at cushioning the economy and protecting Malawians from the rising economic effects of the pandemic.

Then we have cases now being declared.

Tragically, we have the first death reported in Blantyre on Tuesday.

The President’s address was meant to assuage a worried nation that despite the set-backs, his government will spare no efforts to deal with the economic ramifications of the pandemic, which is a good thing.

And so, Malawi Energy Regulatory Authority (Mera) reduced fuel prices with the aim of reducing transport costs immediately, although some critics were quick to say the reduction was inevitable as it is clear that world oil prices have reached an 18-year low.

In an unexpected move, Mutharika has also directed Treasury to reduce his salary and those for his cabinet ministers and their deputies for three months and deploy the resources to the fight against Coronavirus.

His Vice, Saulos Chilima has, on the other hand, donated the whole of his salary to the fight.

Others might see Chilima’s move as not genuine but mere political grandstanding yet it goes a long way to show that those living on public purse must do more if at all we are to take them seriously that they are not in it for personal gain.

But another master stroke from Mutharika is the order to Malawi Revenue Authority to open up a voluntary tax compliance window for a period of six months to allow taxpayers with arrears to settle their tax obligations in installments without penalty.

This is good for businesses as they will not worry about the tax arrears that will certainly accrue as a result of slow pace of business due to the political situation and Covid-19.

Then the shocker came. On social guidelines, Mutharika has completely banned all formal meetings, gatherings and conferences which were earlier restricted to crowds of not more than 100 and workplaces have been asked to work in shifts [exception of those working in essential services] with an aim of decongesting public spaces.

While Malawians see the need to forfeit certain freedoms to stop the spread of the virus, they will not sit quiet when they see that government is getting draconian on the pretext of avoiding Covid-19.

High Court Judge Kenyatta Nyirenda this week delivered a ruling that clearly suggested laws that should govern declaration of disasters are old and government is not even using them rightly.

Then we saw the Cabinet Committee on Covid-19 declaring during a press conference on Tuesday that the Malawi Electoral Commission (MEC) should stop registering voters for July’s presidential election because of Covid-19.

The committee argued there can never be an election if people die.

This sounds true, except that the election we are talking about, was ordered by the court and since Malawi is not a banana republic, it can only be postponed upon the same court being moved and then making that order.

Otherwise, the committee is an interested party and does not have the power to change the course of the election.

Our country is built on the foundation of respecting the laws and institutions.

Probably it is high time Parliament got involved in approving some of these things that the Executive is engaging in everyday and it includes attempts to put brakes into the electoral processes currently taking place in readiness for July 2 election.

In general terms, Malawians clearly see the need for some of their freedoms to be curtailed.

They also see how the public response to Covid-19 is being marshaled, raising confidence in our leaders, starting from President Peter Mutharika down to Cabinet committee on coronavirus.

That said, is it not time for technocrats to take over from the Cabinet Committee of coronavirus so that the briefings get more technical as it is happening in other countries such as Kenya?

The frontline medical staff has done an amazing job so far yet we still see that there are jittery here and there, with strikes in Zomba and Lilongwe.

They are demanding maximum protective wear which is very understandable knowing fully well that the health workers in other parts of the world have lost their lives to the disease after getting it from patients.

This disease is a monster and an equalizer that no one is safe.

This week, we saw British Prime Minister Boris Johnson spending some time in Intensive Care Unit being treated for coronavirus and being given oxygen.

Others to be affected in the past include Prince Charles and a host of movie stars and celebrities across the world.

No one is safe at all with this dangerous disease that sees no race, colour or whether one is rich or poor.

Covid-19 has equalized humanity and affirmed the notion that we are all the same after all.

Through some stroke of luck,