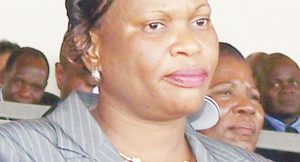 Nsanje North Member of Parliament (MPs), Esther Mcheka-Chilenje, has joined the case in which three Malawi Congress Party (MCP) shadow legislators are challenging May 21 2019 election results for their constituencies, including Nsanje North.

Justice Sylvester Kalembera Monday adjourned the case to August 5 2019 to give Mcheka-Chilenje’s lawyer Patience Maliwa time to appraise himself with the case.

Lawyer for the aggrieved shadow MPs, Wester Kosamu said he would give Maliwa all the documents he has, including what they found at Malawi Electoral Commission (Mec) warehouse during an inspections exercise of polling materials last week.

“I did not object to her application to join the case because at the end of the day, the outcome of the case, especially for Nsanje North, would affect her. I have, however, made it clear that I would not tolerate unnecessary adjournments because she has decided to join the case late when we have made tremendous progress,” he said.

During the inspection exercise, Mec could not produce results sheets and tally sheets for the parliamentary elections for Nsanje Central, Nsanje North and Chikwawa East constituencies which are in custody of the Clerk of Parliament.