Deep in rural communities under Mlumuzana Kapopo Mhlanga in Traditional Authority (T/A) M’mbelwa in Mzimba District, villagers are mobilising themselves to confront the government over alleged neglect of its duty and human rights violations.

The villagers believe duty-bearers are guilty of breaching their constitutional obligations by failing to initiate development projects in the area and sidelining them from budget formulation and procurement processes at the local [authority] level.

Village Head Loti Chisambi said subjects are dismayed that, while duty-bearers have been religious and impartial in supplying them with ballot boxes and papers during elections, they have failed to ensure equal distribution of development resources.

“Of course, we are aware of the right to development but, because there hasn’t been any tangible development taking place in this area since 1994, we simply came to resign to fate, thinking that that the people of this area are not entitled,” lamented Loti Chisambi.

United Nations (UN) defines the right to development as an inalienable human right by virtue of which all peoples are entitled to participate in, contribute to, and enjoy economic, social, cultural and political development, so that all human rights and fundamental freedoms can be fully realised.

The human right to development, according to the UN, also implies the full realization of the right of peoples to self-determination, which includes, subject to the relevant provisions of both International Covenants on Human Rights, the exercise of their inalienable right to full sovereignty over all their natural wealth and resources.

Additionally, UN urges governments to undertake, at the national level, all necessary measures for the realization of the right to development and shall ensure, inter alia, equality of opportunity for all in their access to basic resources, education, health services, food, housing, employment and the fair distribution of income while ensuring that women have an active role in the development processes.

In Malawi, the right to development has been extensively tackled in Section 30 the Constitution of Malawi.

The section emphasises that all persons have a right to development and therefore to the enjoyment of economic, social, cultural and political development and women, children and persons with disabilities, in particular, shall be given special consideration in the application of this right.

It further says the State shall take all necessary measures for the realisation of the right to development.

“Such measures shall include, amongst other things, equality of opportunity for all in their access to basic resources, education, health services, food, shelter, employment and infrastructure. The State shall take measures to introduce reforms aimed at eradicating social injustices and inequalities. The State has a responsibility to respect the right to development and to justify its policies in accordance with this responsibility,” emphasises the constitution.

But Chisambi is confused that the government has failed to utilise its progressive legislation to ensure equal distribution of resources for development projects.

The traditional leader wonders why the government could ignore its own constitutional prescription on the distribution of resources by sideling some areas in the implementation of development projects.

“We have always been at the peripheral of development; and, we don’t even know if the Malawi Government considers us as Malawians or not,” said traditional leader.

But Programme Officer for the Catholic Commission for Justice and Peace of the Archdiocese of Lilongwe (CCJP Lilongwe), Mwai Sandram, attributed underdevelopment to failure by local authorities to fully embrace decentralisation.

Hence, with funding from Hivos, CCJP is implementing Voices and Actions for Accountabilities in Malawi (VAAM) Project to increase citizen engagement and involvement in the implementation of budget formulation and implementation.

The project, which is being implemented in Blantyre, Dowa, Mangochi, Ntcheu, Mzimba, Mzuzu and Zomba, also seeks to empower citizens to actively participate in the processes of procurement of materials for development projects in their areas.

Speaking recently during a training for councillors and legislators in Mangochi, Sandram said decentralization enhances opportunities for citizen engagement and for strengthening citizen voice in the planning and budgeting process; hence.

The committees have a formally mandated membership. On the other hand, councils are responsible for budgets and planning decisions, in response to proposals developed by the VDC and ADC.

Sandram says citizen engagement in the budgeting process allows communities, through their representatives such as village heads and ward councillors, parliamentarians, chiefs, community leaders, village associations, among others, to identify their needs and priorities, with a view to having them captured in the next local authority budget.

Sandram said local authorities have the responsibility to ensure accountability for resources provided to them. He added that it is their duty to ensure that service provision is well tailored, and responsive, to the needs of the communities they were employed to serve.

“The budget formulation at local council level involves consultation with various stakeholders including communities to identify priority areas based on their list of needs. Community consultations in the budget process helps to ensure that the needs of the poor are included in policymaking process.

“This is where there is a greater opportunity for citizen engagement in budget formulation processes. Citizens should take interest in the budget preparation/formulation process, as a budget is formulated based on a local authority plans and national development policy,” he said. 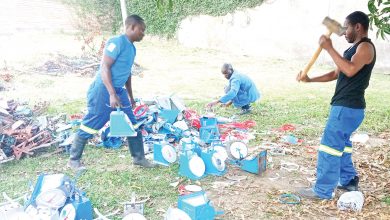