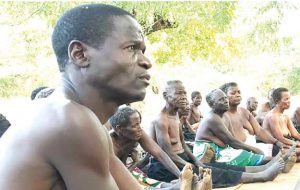 After several failed attempts, I finally managed to do the one thing I have really wanted to do—visiting one of the country’s important cultural shrines, Khulubvi, the spiritual home of Mbona, the legendary rainmaker of the Shire Valley.

I have heard and read so many stories about Mbona’s myths and his alleged super powers.

It is said that Mbona’s uncle Mlauli, who was also a magician, envied his nephew and wanted to kill Mbona.

Mlauli, however, failed to kill Mbona because no weapon could harm him.

Legend has it that Mbona wished to die on his own, and he eventually revealed the secret weapon that could kill him— cutting his throat with a leaf.

When Mlauli did cut off Mbona’s head, it was placed at Khulubvi sacred groove in Nsanje, where the shrine exists today.

I finally visited the site where his head was buried and met people who still believe that Mbona’s spirit still lives. I was privileged to meet Mbona’s descendants.

Mbona, who is believed to have been a Manga’anja, was a legendary and commanding figure with superhuman powers, who lived during the rise of the Lundu Empire.

He is said to have possessed powers of bringing rain and create forests where none existed. The many theories and myths flying around—such as that he was not human or could turn into a big snake or other creatures to hide from enemies—gave rise to a desire to go and see for myself and meet his followers at Mbona’s home; at Khulubvi in Traditional Authority Ngabu in Nsanje.

After I had informed officials at Nsanje District Assembly about my plan, they arranged and booked my trip to Khulubvi Village to visit the shrine and experience first-hand the Mbona rituals.

The officials talked to the chiefs who, in turn, facilitated a smooth passage to the village. I took advantage of the Independence Day public holiday to travel to Nsanje.

I arrived at Khulubvi Village at 9am and was warmly welcomed by TA Ngabu and his Village Headmen.

I noted that the mobile network connectivity was 100 percent at Khulubvi, which was much better than Nsanje Boma—was this Mbona’s magic at work?

I was later briefed by village elders about the whole processes (the dos and don’ts)—what I was supposed to do when going to the shrine.

I was advised not to wear shoes, not to take mobile phones, not to take any photographs, to buy traditional spirit known as Kachaso for the sacrifices at the actual site, among other instructions.

Because of the myths surrounding Mbona, I expected a hostile welcome at Khulubvi. But I was pleasantly surprised with the way they welcomed and treated me, which made me feel comfortable and at ease, allowing me to learn and understand more about the spirit of Mbona.

I later discovered that it is not common for people to visit Khulubvi and witness the sacrifices like I was about to do. Most people have the fear of the unknown.

Traditional Authority Ngabu led the way to the Mbona’s spiritual site, followed by village elders and then me and the other villagers—an all-male entourage. I noted that there was a small house just outside the entrance to the shrine.

Village Headman Mbuka was my sentry, advising me about what I was supposed to observe, note or follow which made everything easier for me.

We went inside the spiritual compound, one by one. The first thing you see when go in is a slightly bigger grass thatched house which I was told belongs to Mbona’s wife and a much smaller house which is Mbona’s graveyard where they buried his head.

Village Headman Mbuka took over the proceedings to conduct the rituals.

He took the five-litre kachasu bottle which I had bought, poured a small amount in a small wooden cup (the size of a chicken egg) and from the small cup, he then poured the kachaso in small wooden plate which was laid down next to Mbona’s grave.

The chiefs and other village elders knelt down and they started asking Mbona to help them with different requests which each one made to him such as good harvest and good health.

I was told that Mbona’s wife was alive and she stays in the house which they had shown me at the ritual site.

At first I thought they were showing me a symbolic house, but I learnt that it was her real house. I was told that she currently stays in that house which did not make sense to me since Mbona was killed hundreds of years ago.

I was informed that after the death of Mbona’s first wife, a special group of people in the area selected another woman to be ‘Mbona’s wife’ and the process has been on-going since. Unfortunately I did not get to meet Mbona’s wife as she was sick that day.

She is not allowed to go outside the compound and participate in any activities. She cannot get married or engage in any sexual activities. She is not supposed even to cook her own meals. The village elders arrange for another person to cook for her.

A villager I asked said he would not object if the village elders selected his mother since her selection to be Mbona’s wife is like a ‘calling’. I was told that her role as wife is that she is a go between the Mbona’s followers and Mbona, who sends messages to his followers through her.

But after the briefings and visiting the shrine, what is my take? I personally think Mbona is a religion, it is a belief system; it is not a tradition. Whichever way you might look at it, he can still be compared to modern day prophets.

Mbona used the same style which modern day prophets are using these days—miracles! I was told that way back then, around 1500 AD while in Congo, Mlauli failed to perform the ‘miracle’ of bringing rain to the people after a drought.

Some people suggested that they should try Mbona after noticing that he was showing signs that he could also possess some powers of doing the extraordinary.

Mbona was called to help and while offering sacrifices on site, the ‘miracle’ happened, rain started falling and people immediately started following and worshipping him.

People started going to him for help whenever there were calamities, droughts and even to address their personal problems.

I asked Village Headman Mbukwa if there are testimonies that Mbona is still performing the ‘miracles’ to this day.

The chief told me a story about a certain family which was having problems conceiving and after going to Khulubvi where they conducted sacrifices to Mbona, the couple is now blessed with twins.

What is the future of Mbona?

“Some of the children are going to different secondary schools and later to college where they do not have opportunities to offer sacrifices to Mbona and are also joining other religions,” he said.

Traditional Authority Ngabu adds that these children do not appreciate Mbona and that they just take it as any other tradition.

My personal view is that Traditional Authority Ngabu and other chiefs from the Mang’anja tribe should make a decision and allow other stakeholders to come in to help in preserving and recognising Mbona as one of Malawi’s sacred traditions.

If other stakeholders come in, they will be able to properly preserve the culture for future generations. Even organisations such as UNESCO and the government through the Department of Culture might come in to formalise Mbona as a protected heritage.

Like my case, for bookings and permission, I had to deal with so many people individually. Mbona requires one central point which can handle all logistics and which will make it easier for people to go and appreciate the Mbona ritual site.

What should be done?

I would encourage government to start taking our culture and traditional beliefs more seriously because this is what will give the country extra advantage when you talk about tourism. Tourism is not about trips anymore; it is a full package—tourism is experience.

Why should people select Malawi as their preferred destination?

Let people come to Malawi and experience our culture and traditional beliefs to understand our uniqueness. When we have organised structures for places live Khulubvi, we will earn more forex and create more jobs.

Musicians Union of Malawi tells artists to be disciplined