It is the second week of December 2021, almost mid-way through the rainy season.

In Malawi, all eyes are on the skies, as people are desperately looking for a fortune, as there is no rainfall sign in sight.

In some areas, such as the lakeshore district of Mangochi, the temperature remains elevated, hitting a record high of 31 degrees Celsius—too hot for even shrubs to survive the next few days without withering.

Ironically, 50 year-old Shanil Mtambo of Namakoma Village in Mangochi District is at ease.

She is tendering her green maize field, which is a portion of the 19.9 hectare farmland under Namakoma Community Trust farm, just about one kilometer from Lake Malawi.

“This is the third time I am producing maize within the past twelve months through irrigation,” she says, “I also produce tomatoes which, along with green corn, I sale to make ends meet.”

“I am able to pay school fees for two of my children, I have refurbished my house and put up an iron sheet roof and I have also built four-roomed guest wings for renting from farming,” she says.

During the first production trench, Mtambo says she raked in K178,000, which more than doubled to about K360,000 during the second attempt.

Mtambo is among 100 farmers under Namakoma Community Trust who tap nutritious water for irrigation from Corran Crocodile Farm.

In 2017, a pact between the farm and community members was made aimed at developing an irrigation farm that utilises the crocodile farm’s nutritious discharge. 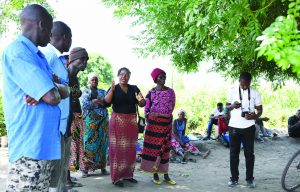 The company uses green water from farming operations at the crocodile farm to irrigate and provide water for crop production and aquaculture at Namakoma Cummunity Trust farm.

Under the project, the company has established a green water management system where 220,000 litres of water produced a day from the crocodile pens is drained into a holding dam, which has a capacity of 3.4 million litres.

Green water is eventually being channeled to the 19.9-hecter farm where the smallholder farmers are, throughout the year, growing crops under irrigation and practising fish-farming.

Corran Farming Limited Shareholder and Director Stuart Ross says the initiative brings about an alternative source of household income for community members as other cash crops are being produced, regardless of rainfall patterns.

“When we came here in 2017, the World Food Programme was handing out maize and other food stuffs to community members because there was no agriculture activity in this area.

“As you know, this is a fishing area and Lake Malawi has been over-fished. The traditional source of income was fishing. They, then, tried their hand on agriculture but the soil was not good for maize,” Ross says.

The narrative has changed, according to Ross.

He recollects that, when they came, Mtakataka was half its current size and has grown considerably, with at least over K10 million per month in disposable income in circulation. 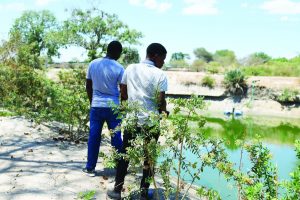 “What happens to the water we are extracting from the lake is that, as it goes round the crocodile pens, it fertilises naturally on the way into the holding dam; from there, we pump it into community fish ponds which we established,” he says.

The initiative is a product of the irrigation window of a matching grant under the Malawi Innovation Challenge Fund (MICF), a competitive grant mechanism for businesses to finance innovative projects.

“This is a green field investment and is a game-changer for the communities. The farm is employing over 110 people and is growing. This is impressive.

“On top of that, over 100 farmers are generating income and they have a bigger picture on how they can expand. We expect more farmers to benefit from this,” he says.

United Nations Development Programme is one of the key funders under the initiative and its deputy resident representative Challa Getachew says the project is structured in tandem with aspirations inscribed in the Malawi 2063—a long term national development blueprint.

“What we are doing in this project is aligned with the priority of the government of Malawi. If you look at the 10-year plan and the Malawi 2063, it talks about inclusive wealth creation and job opportunities. This is it.

“You might already see that they [community members] have plans to expand their farming activities, to develop their business and change the quality of their lives,” he says.

The government feels that adopting such initiatives and applying them in other parts of the country would help in the quest towards attaining the food security mark while creating wealth for all.

Munday Makoko, Project Coordinator at Programme for Rural Irrigation Development under the Ministry of Agriculture, says, through the $2.5 million initiative, the government is facilitating the adoption of the concept in other parts of the country.

“There is, indeed, a significant change. People are able to earn a living out of the initiative while making the most of their effort to feed on the available food,” he says.