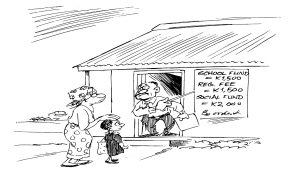 It has been quite a fascinating week; Pupils and students excitedly getting back to school to quench the thirst for knowledge in their brains, but not for long though for some of them because they discovered that no sooner had they arrived on school premises than they were on the next bus heading home much sooner than they had come.

As I finished what remained of my ‘weekend’ on Monday, I was aroused from my sleep by the harmonious melodies produced by pupils at Manja Primary School, I am assuming this was after they had assembled (pa asembule as we call it in Chichewa) on their first day back in school, and for a minute I almost felt like one of them; it was captivating.

But not so for others because we heard later in the day that in some schools, the pupils were being sent back for apparently not bringing along with them ‘development’ fees such as school fund etc: So much for free primary education!

I thought the idea of bringing about free primary education at the dawn of democracy was to ensure that no child is denied an opportunity to access quality education, thereby ensuring that education is not a preserve of the elite? Granted, there could be a nominal fee attached but not as exorbitant as some schools are charging; we hear some are charging K1,500 per ward, which means if you have four children enrolled it would cost the guardian K6,000. Now imagine how much a struggle this would be for parents in the village, who might not have a steady source of income. These unnecessary bottlenecks should have long been eliminated by capital hill if the authorities had genuine zeal to promote basic education in the country. Otherwise, the current scenario only makes things more precarious than they already were, if you consider the miserable conditions under which teachers work and the environment in which pupils learn.

In this day and age, there is no need for pupils to be learning in some grass thatched shack or under a tree when there is a lot of money lying around within public coffers, only that because we have our priorities upside down as a people, we do not think it is necessary to build more schools or eliminate some of these ‘unsanctioned’ fees where school authorities just wake up and decide that we are going to impose such an amount on guardians for their warders to aid construction of school block or brick fence projects.

Instead of dolling out cash for ‘banki nkhonde’ or indeed appeasing a section of followers of particular football clubs with stacks of kwacha, we should be using that money to carter for these seemingly little-but-nagging school funds that appear to choke life out of caring parents and guardians who would want to see nothing but their wards excelling in uninterrupted studies.

Come to think of it, whatever happened to this animal called Malawi Education for All (Mefa)? I remember while I was in primary school between 1995/96 we were asked to buy what was designed like raffle tickets but bearing the inscriptions of Mefa, which we were made to purchase at a cost of one Kwacha per ticket. I feel I didn’t know better, I would say this project might have been a quick scam by some crooked powerful politicians who perhaps used the money to bankroll their political campaign. We cannot continue living under the illusion that our education is free when parents are saddled with mounds of costs each passing day; there are few or textbooks in most public schools.

Why should parents be levied with these ‘development’ fees and yet there are not enough teachers to go round and where there are, the morale is low because they have been pegged at their current grade for years? Those who are lucky get to be ‘politically’ promoted here and there once they do some kind of favours for the powers-that-be; well , we all know how teachers come in handy when the system or any of its arms have some errands to be carried out. Do bear with me; I tend to deviate once I am on a roll, the subject we were looking at is the levying of fees on unsuspecting pupils in public schools.

What actually ticks me off is the fact that most of these bwanas we see at the helm of government ministries, departments and agencies saw how their parents or guardians struggled just to ensure that they get better education and instead of working towards eliminating those problems, they are busy looking the other way when the impediments are being thrown in the path of pupils these days.

I am not going to tackle higher education for the time being, for now let’s accept the reality; we have free education at a fee.