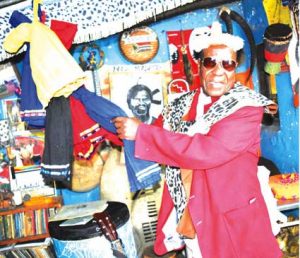 In this modern world where technology is taking its toll, culture is slowly being thrown out – yet a nation or society without culture is like a tree without roots.

But while some have deemed culture as useless others continue to value it to the fullest.

Kungoni Centre of Culture and Art which is under Mua Mission in Dedza led by Father Claude Boucher better known as Achisale is one place that continues to promote culture.

Boucher took the name Achisale when he became one of the few non-Chewa to be initiated into Nyau, the secret society which is responsible for Gule Wamkulu.

Achisale has sought over the 40 years of his work at Mua Mission to create dialogue and understanding where before there was hostility and suspicion.

As a result, he has been granted unparalleled access to Chewa traditional custom; and Chewa participants in Gule Wamkulu no longer feel themselves excluded from the life of the church.

Achisale speaks Chewa fluently. He is a man who wherever he goes speaks highly of culture being very important.

He has even observed that some of the challenges the country is facing at the moment is due to people not respecting culture.

While Achisale has been in the limelight, there are other people who are doing a commendable job as far as promoting culture is concerned.

One of such people is George Kachere, who hails from Dedza in the area of Traditional Authority Kachere.

Kachere lives in Mbayani at a place known as Zikomo in Blantyre.

Upon arrival at his house, you will be greeted by words on the wall written Music School for Zulus and Ngoni Centre which brings people and music together.

Upon entry into his house, one is attracted to portraits of presidents and former presidents on the walls.

On this day, I found Kachere sitting on a chair covered with animal skin.

There was silence in the house and that signified he was all alone. But I was wrong because once he had finished greeting me, a girl appeared.

She knelt down, greeted me before she told her father that she had put water in the bathroom.

Kachere told the girl she would go and bathe later as he had to attend to me first. I felt bad for disturbing his bath.

But Kachere, who comes from the royal family of Traditional Authority Kachere, convinced me it was all fine.

Without wasting time, I went straight to the point telling him that I have been passing through the place many times and that I had always wanted to find out more.

Kachere told me, he was priviledged to have me adding that visitors are always welcome as this was a cultural hub.

Before he could explain more about the place, Kachere excused himself and went on to some of the Ngoni regalia among them a headgear known as Mthini.

Mthini is a head gear which is popular and many Ngonis wear it.

Kachere said he opened the place in 2010 when the African continent was preparing to host the World Cup in South Africa.

“We were looking at several ways of selling our culture to the world and the best way was to create a place. So this is how we started and the aim was simply to promote culture,” he said.

Kachere said he was happy that having managed to sell the country’s culture to the world starting in 2010, they have continued to exist.

“We started on a smaller scale but today a lot of people know this place. We are now a brand as far as promoting culture is concerned. People come here and borrow different items,” Kachere said.

He indicated that they have a lot of Ngoni materials.

“We have Ngoni materials such as zibiya, zihata, nyoni and zinyango (shields). We also teach people how to speak Ngoni you talk of Sanibonani, kunjani,ngiyaphira among others,” kachere said.

He said people come from very far to sell some of the materials they use in making some of the Ngoni regalia.

“We have a sewing machine which we use in sewing skirts and caps for women. We also use it for sewing animal skins to produce other Ngoni wears,” Kachere said.

He said since 2010, they have worked very hard.

“We have plans to expand this place but sometimes we are short of resources. As I said, some of the things we make here but others we get them from home,” Kachere said.

“Culture encompasses a lot of things and music is in there and we thought of making guitars. Some guitars are made outside and we buy them which we use in training those willing to learn music,” Kachere said.

He said they teach people to play different instruments among them drums, keyboards and guitars.

“We actually have teachers and when they are training how to play the instruments, I also participate. At the moment, I can play the guitar as well as the keyboard. I am learning as well because I also want to teach others,” he said.

Kachere said culture and music are the main focus areas of the place.

“Music plays a crucial role in offering entertainment but it also brings hope where there is sorrow, so it’s something we need to master,” he said.

He said they are trying their level best to promote culture.

“We need not lose our culture because this is what tells who we are. Many young people are not interested because they think culture is old-fashioned but a people without culture is as good as dead,” Kachere said.

Born in 1954, Kachere said he is thankful to God for keeping him strong. He is a member of the Seventh Day Adventist Church.

He said people need to utilise the place if they are to learn more about culture.

“Some of the well-known artists come here to borrow items for their shows,” Kachere said.

He said they also produce portraits.

“As for portraits, I am the one, who makes them. I actually started drawing before I even went into cultural things. I learnt drawing whilst in primary school and when I went to South Africa I further sharpened my skills and when I came back, I continued,” he said.

Without a real name – Music School for Zulus and Ngoni Centre might not be well known out there let alone being recognised by the government but it is surely a village in town promoting culture.

And as we wind up, Kachere simply says, this is a simple place but “we are a cultural hub that is promoting culture and at the same time bringing people and music together.”

Is it Big Five or festival?