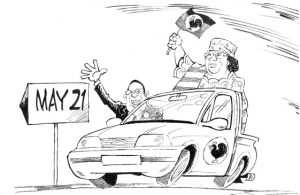 As the countdown to May 21 slowly gathers momentum, parties are leaving no stone unturned to come out victorious.

We will see alignments and re-alignments on the political scene all the way to the polling day as all big parties will electioneer to ensure they improve their chances of victory.

It is not a coincidence that all major political parties are in some form of partnership with junior political outfits. The idea is to enhance chances of success.

Democratic Progressive Party (DPP) has so far partnered with Democratic People’s Congress of Chris Daza while UTM has decided to stick to Alliance for Democracy of Enock Chihana which stayed on after the 48-hour disastrous alliance with People’s Party (PP).

The latest political sensation we have seen on the political scene is a partnership between Malawi Congress Party (MCP) president Lazarus Chakwera and PP president Joyce Banda (JB) who held a joint press conference in Lilongwe to officially announce their union followed by a rally together in Salima.

The Malawi Electoral Commission (Mec) confirmed that the former president formally withdrew her candidature from the presidential race.

The two political outfits are insisting that the ultimate goal is to see that Chakwera is elected president on May 21 2019 and that the alliance will only concentrate on presidential level while Malawians on the ground are free to elect Members of Parliament and councillors of their choice after the two parties agreed to field candidates in spite of the alliance between them.

But is this a good political move for JB or has she just rung a death knell for her political career.

The first female president of the country left for the US soon after that election but came back a year ago, to rejuvenate PP which suffered indiscipline and purged a lot of key members as a result of the void she left behind.

She has so far visited every part of the country where she has attracted decent crowds during her rallies and even during the nomination ceremony at Comesa Hall in Blantyre in February.

Despite all this razzmatazz, JB is not daft to know and appreciate the simple syllogism that if she failed to win the presidency when she was president in 2014, with all the trappings of power and command of State resources that goes with it, she cannot win it without the same.

The simple question she has asked herself is: What has changed now that can make her to turn around the situation that looked better in 2014 than 2019?

The support for Chakwera is simply a pragmatic one.

She has essentially been spot-on to know what can work and what cannot work after realising that there is no point to go into a gruelling campaign when she knows her chances are not as great as they were in 2014.

The only sensible thing for JB was to join those that have a chance, in this case Chakwera, and possibly push through issues that are at her heart through that loose alliance with MCP.

It was very clear right from the word go that JB did not want to run for president in this election as she made that clear as she went about in the campaign that it was not about her but the nation.

Again, this is essentially realising that she cannot make it as president if she failed to do so in 2014 when she was in government.

But as was expected with such a move, the knives are out for JB and the attack is two prolonged.

There is the attack that is mostly coming from UTM sympathisers who are describing her as not principled after that fateful marriage with Saulos Chilima’s party lasted only 48 hours.

These are painting her as not trustworthy.

They are reminding the nation of what JB said on BBC that she had given up the presidency and left it for the younger Chilima, which she recanted some hours later after they could not agree on the running mate position.

The other side of the attack is coming from those that want her to be accountable for some of the things that happened during her rule – from 2012 to 2014 such as Cashgate and the sale of the presidential jet.

Her firm response is that she has nothing to worry about as her hands are clean.

MCP too is suffering collateral damage from it all, with the detractors of the alliance accusing the party of ceding its control to PP with the influx to it of the latter’s former top members such as Sidik Mia, Harry Mkandawire, Khumbo Kachali and JB herself.

This is empty political beef, in my view.

At the end of the day, this country is governed by the rule of law. If JB committed crimes, then she must answer for them. If not, then she must be left alone because forging an alliance with anybody is not a crime in Malawi the last time I checked.

Let us face facts squarely in the face. The move by JB will add some significant number of votes to Chakwera and any honest person should be able to accept that.

I am sure that is the reason UTM wanted PP to join them because the party saw value in such a marriage and regrets the fact that it did not work out largely over the sharing of spoils that included the running mate position.

I still believe that there will still be some seismic shift before the actual voting on May 21 and that the country will experience some endorsements here and there as parties such as UTM and DPP react to this alliance between MCP and PP.

At the end of the day, the principal parties themselves will still matter to determine eventual victories for themselves as the junior partners will simply spice their strengths and add some votes.

This is what might eventually make a difference to whoever wins the ultimate prize on May 21, which is the presidency and State House.

When all is said and concluded, let us be honest. JB’s endorsement of Chakwera has some significance. She still has her supporters in Eastern Region or up North, especially in Nkhata Bay where she is married.

She is a grassroots politician and she has people that still trust her.

As proof of this, we have seen some bitter vitriol from the supporters of both UTM and DPP.

If she does not matter politically, no one would have cared. They care because they know she can make a difference.

We will not be surprised if we see more political activities in rival parties to strongly counter the alliance.

It is not a death knell for JB