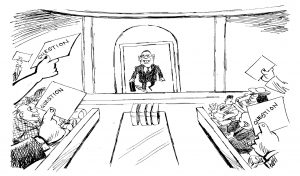 It was quite refreshing to see President Lazarus Chakwera freely interacting with members of Parliament (MPs) last week and the fluidity with which he fulfilled the errand showed that indeed he was no stranger in the National Assembly. It is not a matter of choice that a Head of State has to appear in Parliament; it is a constitutional requirement but somehow it appears we had accepted it as ‘normal’ for our elected presidents to be skipping question time in Parliament. This is an anomaly that we (meaning Malawians) must never ever accept again. I will not dwell on the exchange between the President and Leader of Opposition Kondwani Nankhumwa. In my view, it only served to deviate the attention of Malawians from substantive matters.

What the country needs now is for everyone to hold hands and work together to uplift the economy and spur development activity, especially now when the entire world is reeling from the Covid-19 effects. Malawi’s downturn was not just the Covid-19 problem but also the political instability that was there during the previous Peter Mutharika led administration; an awakening that culminated into the highly anticipated change that bestowed President Chakwera with the country’s leadership and the rest, as they say, is history.

So, it was a good start for the President to appear in Parliament and we can only hope that this will continue throughout his tenure.

The President’s question time was a by-the-way because the real show, which a lot of people were anticipating, was the tabling of the 2020/2021 National Budget. There was suspense in the air considering the fact that this was the first full budget by the new government. The K2.1 trillion financial blueprint certainly has appeased some souls and equally drawn criticism. This is because many are jumping with joy over the adjustment of the tax-free bracket to K100,000, the Affordable Inputs Programme to benefit 4.2 million families and the K10 billion set aside for maize purchase.

Similarly, there are those who felt that not many of the promises made by the Tonse Alliance-led administration in the run-up to the June 23 presidential election have been kick-started. They have been citing things like the duty-free week, free water and electricity connection. They say patience is a good virtue; after all, the new government has only been in charge for no more than three months.

Most importantly, the onus now is on the technocrats within our public service to see to it that the various government ministries, departments and agencies are in sparkling form and speaking to the dream and aspirations of the Tonse Alliance led administration. No wonder, the finance minister reminded Controlling Officers that once the budget passes, they must regard it as law, which therefore means that there will be no room for slip-ups. It was very uninspiring in recent past to see Principal Secretaries or Directors in government failing to account for the mess happening in their departments under their watch; funds were being embezzled left, right and centre; with plebians being deprived of an efficient public social service delivery. Things must change!

Otherwise, let us give the new administration ample time to show us what they can deliver. They must be given the benefit of doubt since we have a long way to go till the next election for them to implement projects.

Talking of elections, the high priests at Malawi Electoral Commission (Mec) revealed this other day that they managed to serve K1.5 billion from their budget for the June 23 presidential election. Justice Chifundo Kachale and the new cohort of Mec commissioners certainly deserve our praise and honour, firstly, for pulling it off in such spectacular fashion when their predecessors, led by beleaguered ex-Mec chairperson Justice Jane Ansah, wanted us all to believe that holding the fresh presidential election in the court stipulated 150 days was mission impossible. Ansah had even gone to the extent of projecting a bloated budget and October 2020 as the possible timeframe…what utter nonsense!

Once again, congratulations to Justice Kachale and team. By the way, did the President say, during question time, that the commissioners are yet to receive their letters of appointment? I say, let us seal the deal now by awarding those letters to those worthy of the job. As for those that were deemed incompetent; certainly they have no business sticking their noses into the elections affairs and they should have voluntarily made a U-turn the moment their parties had re-nominated them but, anyway, it is now up to those tasked with the responsibility, with the wise counsel of legal professionals, to navigate well on this contract issue for Mec Commissioners. Over and above that, we are very happy that the current breed of Mec leadership has restored our faith in humanity. Malawi is on a path to recapture its former glory.

When children turn into breadwinners